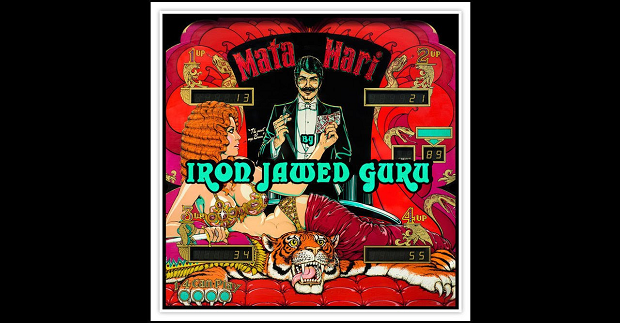 Iron Jawed Guru, the instrumental doom rockers from Morgantown, West Virginia, have come out swinging with latest release ‘Mata Hari’ (released January 29th) through Grimoire Records. It’s a 25 minute long, 7-track battering, fit perfectly for a new age ‘Easy Rider’ lifestyle. Its roots are heavily set in the 90’s era that made Clutch, Kyuss, and Orange Goblin to name a few who they are today, and artwork of an old pinball machine that fittingly bares their name.

Iron Jawed Guru are the brainchild of drummer,Roy Brewer,  and guitarist, Mike Lorenzen. Originally starting in 2013, the band did feature a third member before departing to joining Karma To Burn, Eric Cutter, the provider of artwork and album photography. Holding nothing back, Iron Jawed Guru continued as a due and haven’t stopped the music playing, the outcome being the new record, ‘Mata Hari’.