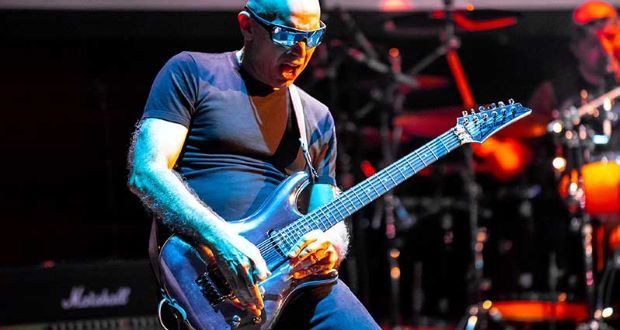 Virtuoso guitarist Joe Satriani has announced a European tour with a set of six UK dates taking place in March 2020,  to support the release of his 17th solo album and going out under the heading of The Shapeshifting Tour.

The live show will feature tracks from the new studio album released by Sony/Legacy the month before the tour in  April, alongside classic fan-favourites.

Solo, Satriani has sold more than 10 million worldwide, two Having gone platinum and four others gold, with 15 Grammy nominations between them.  Chickenfoot, the side band he formed with Van Halen’s formersinger Sammy Hagar and bassist Michael Anthony, along with The Red Hot Chili Peppers’drummer Chad Smith had teir debut album certified gold and their second studio album debuted at #9.

Alongside this, Satriani has toured worldwide over the last two decades, both solo and as part of his G3 Tours wherein he features other internationally famous guitarists as part of the events.

The last G3 Tour followed the release of 2017’s What Happens Next album, before he headed out on an Experience Hendrix US tour.  Squares, a collection of previously unreleased material by his first, pre-fame band of that name was recently released and his classic 1987 Surfing With The Alien isdue to be reissued with new artwork and a bonus disc, Stripped – the Backing Tracks,featuring the songs with all guitar solos removed.

Tickets for The Shapeshifting Tour are available herewww.alttickets.com and www.satriani.com

Previous: As Sirens Fall premiere cinematic video for ‘We Go Down Together’
Next: Yes From a Page