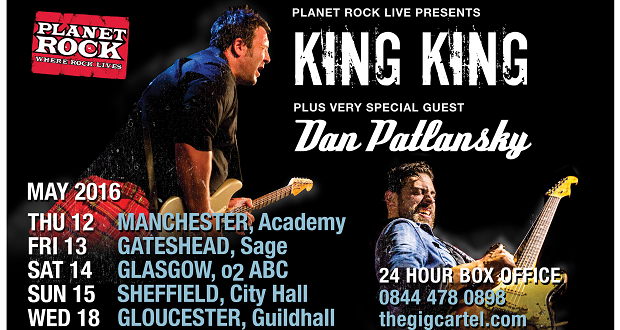 Award-winning blues rock band King King kick-off a nationwide tour at Manchester Academy on Thursday 12th May. The tour is an association with Planet Rock, with whom the band have scored two recent radio hit singles in ‘Crazy’ and ‘Hurricane’ and could well follow it with a third, the recently released radio mix of ‘Rush Hour’ all taken from their last full album, Reaching For The Light.

Reaching for the Light, has been championed by dozens of music magazines including Classic Rock, Guitarist and Blues Matters while also receiving a glowing review here at Ramzine. Touring at the time of its release last year, they would go on to do a full electric session for Paul Jones’ Blues Show on BBC Radio 2,  be handpicked by Thunder to open for them on their UK arena tour this February, and be nominated as Best New Band at this year’s Classic Rock Awards.

Special guest on the May tour will be South African blues rock guitarist and singer-songwriter, Dan Patlansky whose Dear Silence Thieves album was similarly well-received by Ramzine and voted No. 1 on Blues Rock Review’s Top 20 Blues Rock Albums of 2014 and has a new studio album Intro-Vertigo imminent.