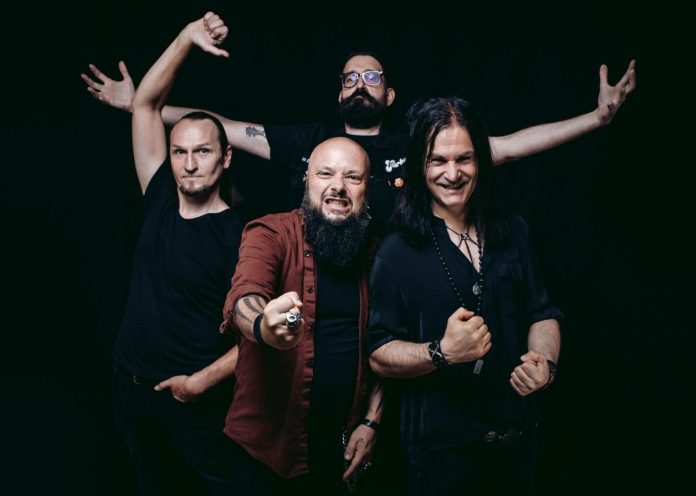 Ashes And Fire’ is about people who want to be the centre of the universe, no matter what it takes. People who feel the need to attract views to flatter their egos. No price is too big for these people. Killing people, killing the Earth and everything that goes along with it, as long as they get attention.

‘Ashes and Fire’ is chunky and groove laden, with a melodic, catchy chorus and reflects the evolution of the band as a whole.

You can order ‘Ashes and Fire’ here.

A band drenched in 80s hard rock riffs mixed with traditional metal elements. They released their self-titled debut album in 2019 via earMusic, with guest appearances from Bob Daisley, Vinny Appice, Don Airey, James Lomenzo and Rudy Sarzo, and they have a new record in the can ready for release soon.

Previous single, ‘I Don’t Wanna Be Your God’ mixed the band’s early influences such as Black Sabbath and Ozzy Osborne, as seen in its grungy harmonies and big choruses. The track describes God looking down on humanity, his creation. He’s tired of the world, tired of the pain he has to carry, and has decided that he doesn’t want be our God any longer.

You can catch the video to it right here at RAMzine.

Already recorded, and including guests such as Kenny Aronoff, their new album will be released in mid-2021.

“We are beyond excited to be a part of Crusader Records/Golden Robot Records family,” said the band. “We can’t wait to share the new songs we have been polishing during those down times! And once we get a green light, the roads are calling us to meet with our fans and get that party rolling.”

‘I Don’t Wanna Be Your God’ can be ordered here. You can watch the video to it right here at RAMzine, and a preview to previous single ‘Main Attraction’ also, plus you can also listen to the band by clicking here.