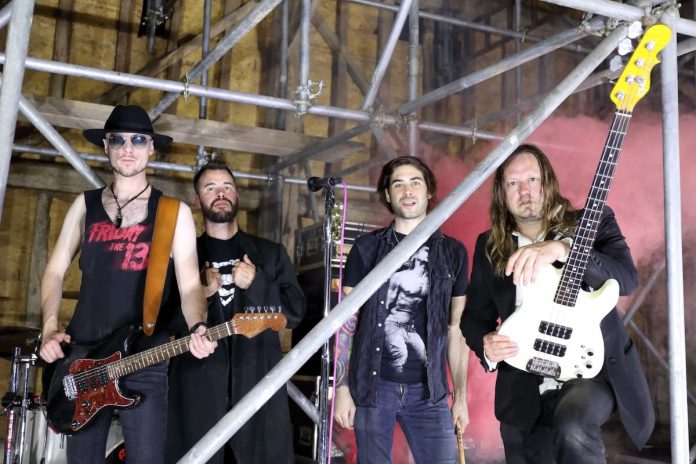 Leader Of Down has a new single out by way of the title track on their newly released second album, The Screwtape Letters, through Cleopatra Records.

The album title taken from the book of that name written by C.S.Lewis, of Narnia fame, addressing Christian theology between two devils, and dedicated to his friend Lord Of The Ring‘s author J.RR. Tolkien.

The book was given to bass player Tim Atkinson by his father when he was a teenager and had always held a fascination with him., not east because Atkinson’s father was a priest.

‘The Screwtape Letters’ song itself proves to be nothing less than a boogie tune with early Detroit rock city Alice Cooper spunk, and the kind of attitude we really need to bring back into fashion.

You can check out the new video for the single right here at RAMzine.

Previously, the band released the single ‘Cat’s Eye Night’ – On that one, Terse guitars rev up and close in tight round the corners in a number that holds close to old Lemmy’s sense of lyrical melody, albeit frontman Matt Baker gives it several notches more in the sonics department. While the song itself is fashioned in NWOBHM riffage there are some cracking breakaway sections, with it all boding well for the album as a whole being its opening number.

‘Cat’s Eye Night’ apparently developed from a conversation between guitarist Alex Ward and Atkinson after watching the Stephen King film Cat’s Eye to which Atkinson added the word “Night”. This led to Atkinson writing the lyrics about the night in the studio recording with the aforementioned Lemmy Kilminster, whilst working on the track ‘Paradise Turned Into Dust’ from the band’s debut album Cascade into Chaos.

Those Motörhead links are strong with the band, Leader Of Down having been co-created by that band’s former guitarist Würzel, alongside Atkinson who was Lemmy’s technician, plus originally on drums Steve Clarke, formerly of Fastway.

Following Würzel’s death in 2011 the band continued to finish their debut album, and enlisted the help of some friends to honour the guitarist. Aside from the aforementioned Lemmy, this included Fast Eddie Clarke, also subsequently deceased; and Whitfield Crane from Ugly Kid Joe who sang on ‘Born To Raise Hell’ with Motörhead during Würzel’s time with the band; as well as Lee Richard (Godsmack), Bruce Foxton (The Jam), and Cliff Evans (Tank). The band was subsequently completed by vocalist Matt Baker and guitarist Alex Ward, and now feature Daniel Akaoui on drums.

Regarding other tracks on the album, ‘Holloway Motel’ is more Waysted gone rogue punk, with heads down singalong choruses before a guitar solo nearly falls over itself waiting to break free. It’s so swiftly followed by ‘Hitman’ that it bites you on the ass – The pace unrepenting, its lyrics as with most on this record quite spectacularly gonzoid at times; quite how dangerous the self-titled antihero of the song is, isn’t clear, more your local hoodlum than the Lawrence Block hit crime fiction series variety.

‘Hitman’ was the first single taken from the album and features a guest appearance from former Iron Maiden and Praying Mantis guitarist Dennis Stratton.

“It was a great pleasure to be asked to provide a solo for ‘Hitman’ and having guested on stage with Leader Of Down on a recent UK show it was great to be back with the boys and appear in the video as well,” said Stratton, who currently plays with Lionheart.

The solo continues to score points for the record, and the chorus line “whoa-a-whoas” don’t disappoint either. Now, ‘Dodging The Landlord’ ropes in a riff that’s second cousin to ‘Hitman’ only to slow down the tempo, the shudder and shrug with a steady heavy groove in between -The title says it all song wise; it’s like the grown-up but no more mature companion to Supergrass’ ‘Caught By The Fuzz’. Similarly, ‘Here’s Johnny’ is a song for underage drinkers who want to grow up to be greasy old school bikers’ rock. A solid and reliable rocker, while ‘Let Them Know Your Name’, a song for survivors, takes a more anthemic approach with its undulating guitar riff, while the final of several solos on the number soars through the rafters and barely last seconds, leaving you wanting more.

‘Whiskey Preacher’ features a staggered thwacking guitar hook with lead (possibly slide) chiming in over the top – It’s kind of like how Black Sabbath might’ve sounded if they’d kept former Savoy Brown Dave Walker on vocals, when Ozzy went MIA for a while prior their 10th anniversary. God, I’m old, and ‘You Might’ may have its roots in something even more ancient, coming on with a balshy mod attitude, like The Small Faces sinking Guinness rather than popping amphetamines over a, slightly, more theatrical rock number. The cheeky lyrical approach is both Marriot and Fin on Waysted infamy in equal measures.

The closing number is ‘Midnight In London’ but if it’s bed time, there’s no let-up in speed, racing away as they do, even as the breakdown chords ensue. However, one should not presume this is all chugging along stuff, there are seriously complicated time changes thrown in here among the other numbers, all kept in time by a crisp power-packed drum sound.

The band pull together musically, things get clever when they need to and don’t outstay their welcome, while Baker has character to his voice, the group’s lyrics may not always prove profound but what the hell this is rock and roll!

There’s nothing new on The Screwtape Letters but it’s performed with adventurous wit and panache with some incredibly catchy hooks that grow on you. Good times, good fun, give it a listen it more than deserves it. It is available worldwide through US label Cleopatra Records on all formats, including a special limited edition red vinyl and CD with full colour 20-page booklet.

Check out the videos to the singles released thus far here at RAMzine.

Following on from a successful appearance at the Motörhead weekend in Blackpool, Leader Of Down will be the main support for Phil Campbell And The Bastard Sons at their O2 Academy Islington show on Wednesday May 18th.