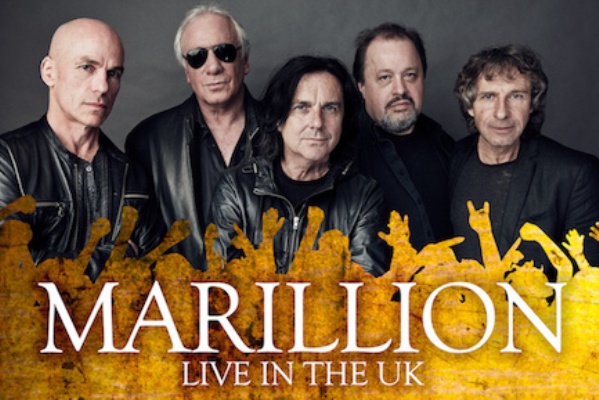 With two London shows selling out in four minutes (The Royal Albert Hall in October, and the London Palladium in November), expect a seven date UK tour in April next year to do similarly brisk business for progressive rock band Marillion.

The last couple of years have found the band on a particular high. Their most recent album, F E A R (Fuck Everyone and Run) reached No. 4 in the UK album charts and No. 1 in the rock charts last year, and was given a 5 star review by The Guardian, and won an impressive eight categories in the 2016 Prog Mag Awards: Band, Album and Event of the year plus individual awards for Best Male Vocalist (Steve Hogarth), Best Bassist (Pete Trewavas), Best Keyboardist (Mark Kelly), Best Guitarist (Steve Rothery) and Best Drummer (Ian Mosley).

Steve Hogarth said: “I have been part of this band now for 27 years and it barely feels like 10. I think we’re as inspired as we ever were, and we’re still enjoying creating together. Luckily our music has remained free to evolve and change without the constraints of a corporate music business which otherwise might have killed us.”

After nearly 40 years, the band has evolved into a vibrant and international musical force, flourishing seemingly outside of fashion and mainstream media exposure. Since their formation, they have had 19 top 30 singles, four of reaching the top 10.   Furthermore, Marillion are widely acknowledged to be the first band to use the now commonplace crowd-funding scheme as a business model, with fans sponsoring an entire US tour in the late 90s and the first crowd-funded album, Anoraknophobia, released in 2001.

“By reinventing the business-model we have maintained a one-to-one relationship with our fans, and that feeling is never more apparent than at the live shows,” Hogarth continued. “It’s always a pleasure to share a room with the family and exchange the passion on stage with the passion off stage. We’re playing a few places we haven’t visited for a while. Long overdue. ‘Really looking forward to this little outing.”

Tickets are on sale from myticket.co.uk, seetickets.com and venue box offices.