Truth Is A Wolf the debut album from Mollie Marriott will be released through Amadeus Music on Friday 3rd November.

The daughter of the late Steve Marriott and step-daughter of Joe Brown, her vocal pedigree has been long established having worked live and on record with numerous acts (including Oasis), with the likes of BBC Radio 2 disc jockey Bob Harris, and The Rolling Stones’ Ronnie Wood and Peter Frampton all heaping praise.

“They say the apple doesn’t fall far, it’s not surprising she has an incredibly soulful voice and is a great live performer,” declared Frampton who played with her father in Humble Pie, adding: “It’s been hard waiting for her first solo album to come out as I’ve known all along how important her voice is to be heard.”

Truth Is A Wolf is available for pre-order through Marriott’s website in limited edition red vinyl and as a CD in both standard and deluxe format. Fan favourite bundles are also available with exclusive signed merchandise ranging from t-shirts, posters, set lists, unique photos and even house gigs!

The standard edition of Truth Is A Wolf  features ten tracks: ‘Control’, ‘Broken’,  ‘Truth Is A Wolf’,  ‘Give Me A Reason’, ‘Run With The Hounds’, ‘Love Your Bones’, ‘Transformer’, ‘Fortunate Fate’, ‘King Of Hearts’ and ‘My Heaven Can Wait’. The deluxe edition features two bonus tracks, ‘Armour’ and ‘Gravity’ and Paul Weller is featured both on the title track and ‘King Of Hearts’.

“I’m really excited about the album,” said Marriott, “It features a lot of different styles and I think it really showcases my vocals. We have a lot of fun making the album and I hope people enjoy listening to it. I can’t wait to perform the songs when we tour with Bad Touch in the UK during November.” 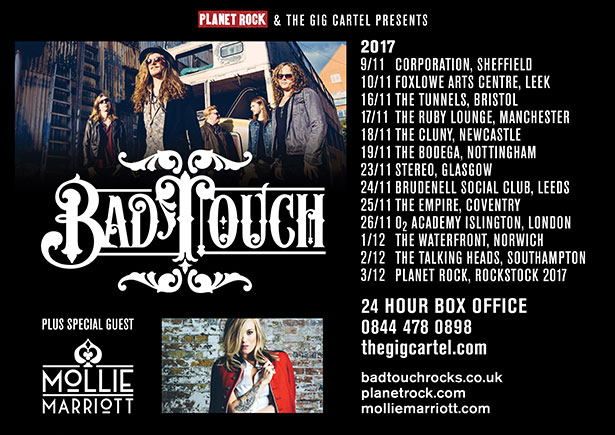