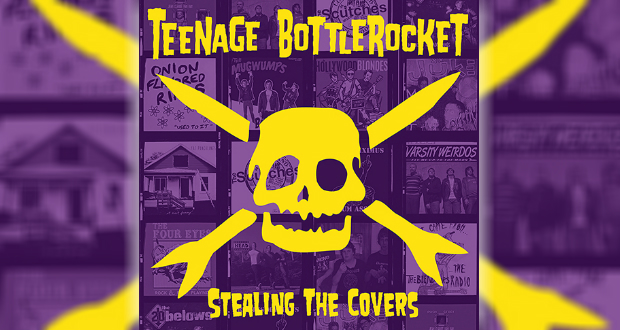 Stealing The Covers is a covers album with a difference. Rather than picking songs then they are never going to better, Teenage Bottlerocket have gone back through their career and grabbed tracks from the countless bands they’ve toured with and which your standard fan probably hasn’t even heard of. It leads to a weird situation where you could put this on and not even realise it is a covers album as most of these tracks don’t see Bottlerocket stray too far from what they know.

Sadly, that’s also what makes the opening two punch of ‘The Way I Know’ and ‘Back and Forth’ fall a bit flat. There is nothing bad about them per say, but they struggle to stand out. They are skate punk tracks with catchy choruses and sweet melodies, but in the wider scheme of things, there is a hell of a lot better out there.

It’s not until a bit deeper into the album that Stealing The Covers begins to shine and it’s with two very different songs. First up is ‘Don’t Go’ which brings a bit more emotion to the punk rock fun. It’s the first track to have meat on its bones, and it thrives because of that. Following that up is ‘Robocop Is a Half Breed Sell Out’ which makes up for any meat it lacks with pure silliness. It’s daft but damn is it catchy and after just one listen you’ll find yourself humming the chorus at every chance you get.

The thirty-six-second blast of ‘Shit Fuck God Damn’ brings with it a bit of aggression while ‘Gay Parade’ joins ‘Robocop…’ in bringing some catchy silliness with its refrain of ‘I’m riding my rocket ship to the gay parade’. Elsewhere, ‘Alien Motion Technology’ charges along at a ramshackle pace and will have you bouncing around like a child on Christmas. Unfortunately, for every hit, there is a ‘Hat Nerd’ which will leave you feeling cold. A track where the silliness isn’t backed up by the music.

Despite its twist on the genre Stealing The Covers ends up being like most cover albums, hit and miss. There are moments where it shines but then others where it just bounces along, failing to shift the speedometer of excitement. It’s a good exercise in finding yourself some new bands to check out, but as an album in its own right, it is far from essential.