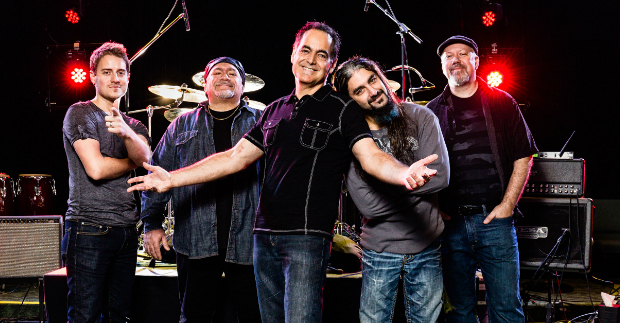 Out soon is Neal Morse – Morsefest 2014 Testimony and One Live featuring over five hours of live performances of solo material by the singer/multi-instrumentalist alongside modern classics from his times with Spock’s Beard and Transatlantic.

Morse said, “We really went all out this time. I wanted it to be the quintessential presentation and    performance of this music.” So much so, he even flew out Rich Mouser who mixed the original studio albums to do the front of house mix.

Forming Spock’s Beard with his brother Alan Morse, the band became one of the most popular new prog bands of the nineties. In 2000, Neal Morse formed the progressive rock supergroup Transatlantic with Mike Portnoy (The Winery Dogs, Dream Theater), Roine Stolt (The Flower Kings) and Pete Trewavas (Marillion) who established themselves swiftly, gathering critical acclaim and being recipients of Prog! Magazine’s Album of the Year Award and Orange Amplification’s 2014 Progressive Music Awards.

Morse also began to release his own solo material, beginning with Songs From November, a “singer-songwriter ‘feel good’ album” full of strong melodies and powerfully personal stories. Then, following the release of Spock’s Beard’s 2CD concept work, Snow (a fan favourite), Morse shocked his followers with word he was stepping away from music. A Christian, he was said to be seeking inner peace. He found what he was looking for and relived the experience via the two CD collection Testimony, music that spans numerous styles with orchestral movements, gospel strains and signature progressive rock contributions from Portnoy and former Kansas mastermind Kerry Livgren. It lead to an ongoing solo career with albums such as One, and Sola Scriptura through to Momentum with guest musicians featured over a number of records including former Genesis guitarist Steve Hackett and Mr Big’s Paul Gilbert.

Returning to a group format, Morse joined the more pop-orientated prog band, Flying Colors, again featuring Portnoy, alongside guitarist Steve Morse (Deep Purple), bassist Dave Larue (Dixie Dregs) and singer/songwriter Casey McPherson for a 2012 album and tour with a 2014 follow-up in Second Nature. Wanting to work in a band format for his own future recordings he also formed the Neal Morse Band who this year released their first project, The Grand Experiment, and about which he said: “I made a lot of room for the other guys to create and express themselves and the result is outstanding!”

However, in between all that, last year 2014 Morse decided to do a two day festival at his home church. The festival’s name, created by long-time friend, Mike Portnoy, was [Morse]fest. Morse, Portnoy, George along with new comers Eric Gillette, Bill Hubauer, and a slew of special guests performed Testimony on night one and the One album on night two. This was the first time that the One album had been performed live in its entirety. This unique event included special opportunities for personal interaction with the band and stellar performances of the two classic releases that launched his solo career. The results can now be seen and heard worldwide on Neal Morse – Morsefest 2014 Testimony and One Live.

Drummer Mike Portnoy commented: “I’ve got to say… As a fan of this wonderful music, how incredible this is! I am so happy to see this come to fruition. This music really deserves this… Everything from the incredible presentation, and all these amazing musicians… It’s great to hear this music come to life on stage like this. To be doing it in his hometown with all his friends and family present and to be doing it here in this building that has such incredible importance to him and his story, it’s elevated the music to a whole new level. This has just been an amazing experience!”

One that is set to continue [Morse]fest 2015 now in the works to be held September 4th – 5th, wherein the Neal Morse Band along with special guests his “?” and Sola Scriptura albums. But for now, Neal Morse – Morsefest 2014 Testimony and One Live features the entire albums of those names, alongside special encores of the Spock’s Beard classic ‘The Light’guest featuring Alan Morse, and the Transatlantic epic ‘Stranger In Your Soul’, plus a behind-the-scenes documentary with footage of an exclusive Neal Morse acoustic concert, rehearsal footage, a “Name That Prog Tune” game with Portnoy, and more.