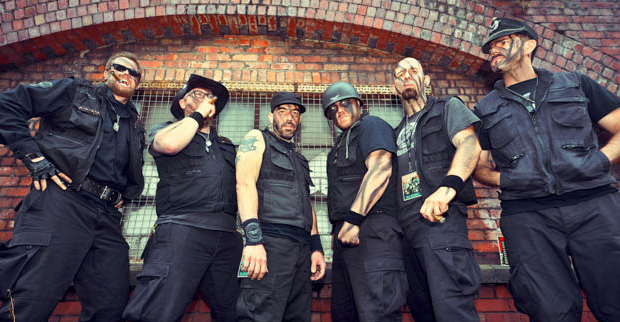 Not that many people know that there are bands on at Bloodstock Open Air on Thursday too. This year is no different. So who better to headline Thursday than ‘The Greatest Band Of All Time’ ArnoCorps?

We caught up with all five…I mean six members of ArnoCorps to talk about why they haven’t played a festival before, the misconceptions about their music, and being BALLSY!!

How do you think your show went last night?

Holzfeur: I think it was unbelievable, the crowd were up to pump..in fact we even measured their biceps, we measured across the pectoral. Then we measured them after they left the tent there was a substantial increase in in muscle. I think they call it 10%?

You don’t generally play festivals, why did you choose Bloodstock?

Holzfeur: Primarily because this is what the people have asked for. When ArnoCorps first came to the UK, it was 2006, at that time on the Bloodstock forum there was a thread saying ‘We need to bring ArnoCorps to Bloodstock’. At that time we had just had out album released in the UK ans Europe, we had recorded our first album in 2000, so it was a few years later. People were excited and said ‘we need to see you at Bloodstock’ so year after year people have asked! And finally this year Bloodstock LISTENED!!

You are known as ‘The Greatest Band Of All Time’ what makes you so great?

Vielmehr: Welll we are the greatest band of all time because it’s not just the six of us up there, you understand, we are ArnoCorps we are not just a group. We don’t have fans we have the God damn heroes and sheroes. We’re all in it together. So to call us ‘The Greatest Band Of All Time’ and just have the six of us up there doesn’t make sense – It’s all about the unit, the group and and the people. You saw it last night, a lot of people saw us for the first time and the action, the adventure, the swarming going on – people loved it.

Holzfeur: Exactly, and it’s also a message – for anybody out there who truly wants to aspire to become great at something you want to do…dammit, it’s self-fulfilment right there!ArnoCorps forms a band, we announce to the world ‘C’mon we’re the greatest band of all time’ so over time, people are accepting the fact they are getting tattoos of ArnoCorps and saying’this IS the greatest band of all time!’ and that is inspiring to people.They witnessed that, they saw it happen … if you decide to say ‘you are the greatest’ it is self-fulfilment, it becomes your drive in the morning. what are you going to do when you know in your mind when you already promised the world you would  bring them the best? YOU GOTTA DELIVER! THERE’S NO CHOICE! and that’s what ArnoCorps have been doing for 15 years now!

You can hear the rest of the interview in the video below: