Late 2013, Motörhead released their 21st studio album, ‘Aftershock’ to great international acclaim and a slew of top 10 to 40 album spots. Motörhead are now set to release ‘Aftershock Tour Edition’ on 7th July 2014, through UDR Records. More great news, is that the band will be touring at festival across Europe this summer!

‘Aftershock Tour Edition‘ will contain a bonus disc of live material comprised from the band’s historic appearances at the 2014 West Coast Tour, and in further celebration, the release will include ‘Lost Woman Blues’ live from The Warfield in San Francisco. The show was part of the band’s warm-up mini tour for the forthcoming European festivals, and the song’s performance, verve, swagger and attitude show Motörhead have maintained their rich ripeness and added another layer of grit and polish. 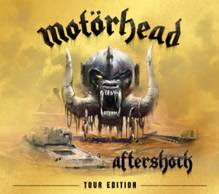