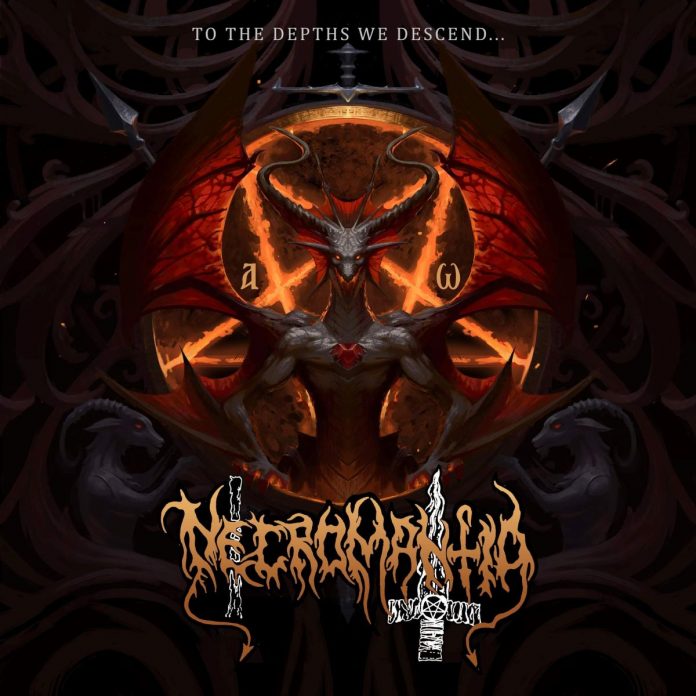 Necromantia has just released a lyric video to the track ‘Inferno’ off their upcoming farewell album To The Depths We Descend.

The influential black metal band was created in late 1989 by two like-minded individuals: The Magus (bass/vocals) and Baron Blood (8-string bass). With the passing of the latter member, the band is being laid to rest.

“This is our farewell album,” said The Magus. “This album in itself is a tribute to our member Baron Blood who left the mortal world in November 2019.

“I decided to write and record the last pieces of music as Necromantia as a farewell to our loyal fans all these years. It may sound strange to their ears since we use guitars again since our Promo Tape 1990 but the use of the 8-string bass belongs to Baron Blood and it will remain with him.

“So here you have six new songs (+ re-recording of two of our iconic tracks ‘Lord Of The Abyss’ and ‘The Warlock’) which I suggest that you listen to in their entirety since they represent the many faces of Necromantia’s musical spectrum and each one of them is a story of the whole. Our compass was always the desire to deliver quality and innovative extreme dark music and our head may be bloodied but it is still unbowed. So, dive one last time into our wondrous abyss and let yourself be guided by our music.

“From the bottom of my soul I thank you for all your support in all these 32 years of our existence.”

Tracks feature on the final album will be: ‘Daemonocentric’, ‘As the Shadows Wept (For Baron Blood), ‘Give The Devil His Due’, ‘Inferno’, ‘Eldritch’, ‘To The Depths We Descend…’, ‘Lord Of The Abyss MMXXI’ and ‘The Warlock MMXXI’.

You can catch the lyric video for ‘Inferno’ right here at RAMzine.