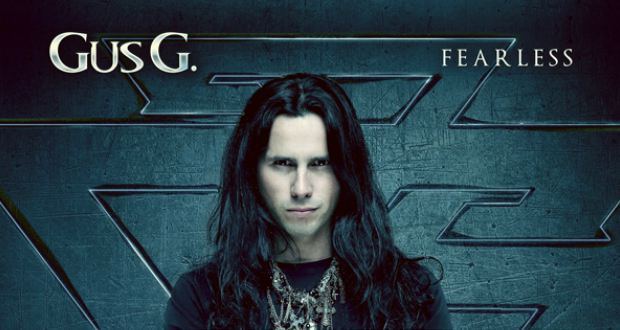 Establishing his credentials with power metal band Firewind, and taking in a tour of duty with death metal act Arch Enemy, it was as part of Ozzy Osbourne’s band that the guitarist found wider fame. With Fearless G goes the power trio route bringing on board vocalist/basss player Dennis Ward (Pink Cream 69,Unisonic) and drummer Will Hunt (Evanescence, Black Label Society).

“Dennis and I have collaborated very closely for a number years, he produced the current Firewind album Immortals, among other things. We’re on the same musical wavelength and simply continued our cooperation after the Firewind production,” G commented. “I sent him demos of and ideas for my new songs and once we had enough material and started to think about vocalists, Dennis suggested recording the album as a trio.

“A lot of people don’t realise that Dennis is not only a brilliant songwriter, bassist and producer but also an excellent singer. I immediately liked his suggestion because this would be very different from everything else I’ve done before.”

With Ward on board it wasn’t long before Hunt was too. “Will was at the very top of my wish list. Fate smiled on me because we played at the Frankfurt music fair 2017 during my tour with Steve Stevens, and Will stayed at the same hotel. So I approached him, we talked for a while and he agreed,” said the guitarist. “Last August he came to the studio and recorded the drum parts for the whole album within two and a half days. A real pro with a great groove and an awesome punch.”

Tracks featured on the record are ‘Letting Go’, ‘Mr Manson’, ‘Don´t Tread On Me’, ‘Fearless’, ‘Nothing To Say’, ‘Money For Nothing’, ‘Chances’, ‘Thrill Of The Chase’, ‘Big City’, ‘Last Of My Kind’. The digipak and vinyl editions come with the bonus tracks ‘Little Ain´t Enough’ and ‘Aftermath’.

The music is said to range from hard-as-nails heavy metal to melodic rock and three instrumental that showcase Gus G’s guitar playing. “A lot of fans have asked me to record more instrumental tracks, he commented. “Voilà, here they are.” The real surprise, however, is likely to be ‘Money For Nothing’ – It’s Dire Straits’ massive hit single, but we’re sure you can expect some surprises upon hearing it!