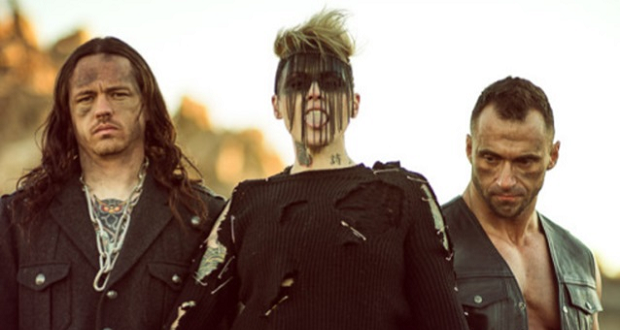 Iconic rockers OTEP recently announced details regarding their most uncompromising, candid, all- inclusive and controversial assessment of the current residing political regime that they have ever released entitled “To the Gallows”.

The track is lifted from their eighth full-length album, aptly titled Kult 45, on July 27, 2018 via ​Napalm Records.

Drawing influences from politically-charged recording artists of the past but allowing her artwork to remain fully and undeniably OTEP, Otep Shamaya continues her nearly two-decade invasion of the senses she had this top say about the release:

“Art is resistance. Art allows us to fightback without violence. This song, ‘To the Gallows’, is meant to shine a light on Traitor Trump’s attacks on the Constitution, on Healthcare, on the LGBTQ+, the African American, Hispanic and Muslim communities, DREAMERS, and women’s reproductive rights. Not to mention that this spurious President might have committed just a little bit of light treason, but this is why we rally, this is why we march, and this is why I write. Because when I look back someday I want to know that I did everything in my power as an artist, activist and citizen, to stop him and his bigoted embryonic autocracy.”

Shamaya has gone on record to say that Kult 45 is the most authentic album OTEP have ever released, at least since their first record, and self-producing it helped achieve this result. Kult 45 was recorded at The Lair in Los Angeles, completely utilizing the same equipment used for OTEP’s first album.

See the lyric video for ‘To The Gallows’ below: