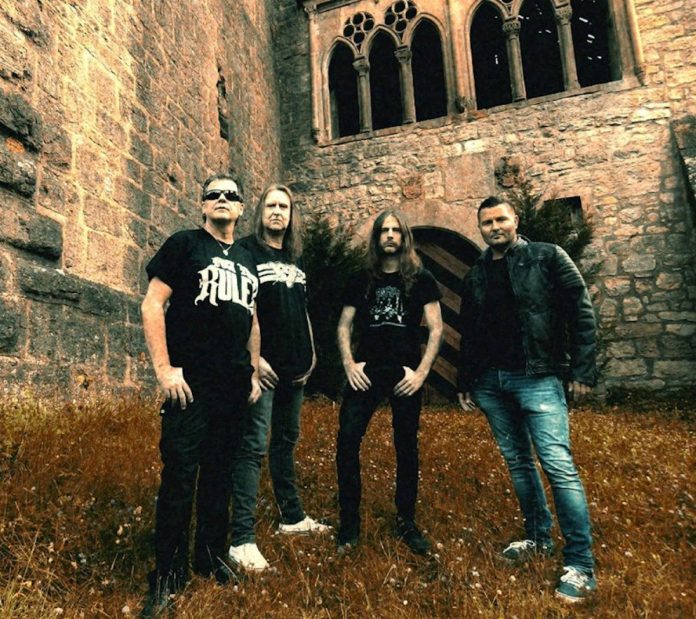 ‘Mountains And Caves’ is the latest single from Paradox, it’s the third one taken from Heresy II – End Of A Legend, their new album due for release on  24th September on AFM Records.

The roots of Paradox go way back to 1981, and after several changes they took up that name in 1986. The following year they released Product of Imagination, followed by the concept album Heresy, that proved an international success and catapulted Paradox’s career.

Back in 1990, the internet was virtually unknown, mobiles were as big as buffalo bones and the Wacken Open Air Festival was a party for the village louts. These are stories from a long-forgotten time, but back then Bavarian band Paradox released a thrash metal classic, they plan to do so again in 2021 when Heresy II – End Of A Legend, their eighth studio album is released.

Frontman Charly Steinhauer has gathered a very special line up for Heresy II – End Of A Legend. Guitarist Christian Münzner and long-time bass player Olly Keller are back after a break of one album. Paradox co-founder Alex Blaha returns, not having played on record since the original Heresy, likewise the man behind the lyrical concept of the band’s first two albums, Peter Vogt, is back – Having wrote their story of the crusade of the Catholic Church against the schismatic Cathars in the 13th century, he returns, the tale not yet over.

Heresy II – End of a Legend starts where the first part ended in 1990. The album was produced by Steinhauer, mastering by Hannes Grossmann in MordorSound Stuidio in Veitsbronn, and the sound is said to be old school meets new production techniques.

During over 75 minutes of melodic trash metal, fans can hear the following tracks: ‘Escape From The Burning’, ‘Mountains And Caves’, ‘The Visitors’, ‘Children Of A Virgin’, ‘Journey Into Fear’, ‘Burying A Treasure’, ‘A Meeting Of Minds’, previous single release ‘Priestly Vows’, ‘Unholy Conspiracy’, ‘A Man Of Sorrow (Prologue)’, ‘A Man Of Sorrow’, ‘The Great Denial’ and ‘End Of A legend’.

You can watch the official videos to all Paradox‘s singles for this new album here at RAMzine.

Heresy II – End Of A Legend is set for release 24th September on AFM Records. You can pre-order it here.