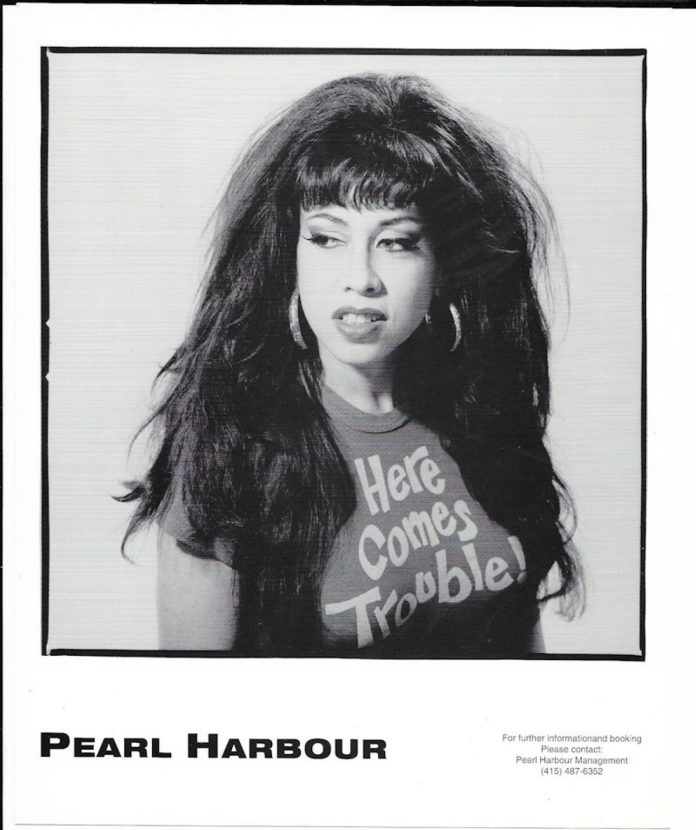 New wave/punk alternative vocalist Pearl E. Gates, now known as Pearl Harbour, was formerly married to Clash bassist Paul Simonon. She had been a part of Leila and the Snakes and formed the band Pearl Harbor and the Explosions, known for their 80s hit ‘Drivin’. Now, in 2021 she is making a return to the music scene.

Fresh after two recent singles in ‘I Wish You Were Here’, and ‘Trouble’, Die Laughing Records has released the album Here Comes Trouble.

‘’Originally recorded in 1995, Here Comes Trouble features my San Francisco band: East Bay Ray, Stinky Le Pew, Lee Vilensky and Mike Hunter,” said Harbour. “We dedicated this album to original bass player Buck Naked, who was killed in 1992.  We wrote most of the songs together and enjoyed 6 years of playing the West Coast circuit.

“If you like old school rock & roll, you should give Here Comes Trouble a listen. It’s 13 fun filled tracks with humorous lyrics about the usual juvenile delinquent stuff that we still find amusing. I love this album! It’s great too dance to. Try it, you’ll like it!’’

The album has a long-storied background. When Gates moved back to San Francisco from London back in 1988, she approached one of her favourite musicians, bass player Buck Naked from Buck Naked and the Bare Bottom Boys, and he suggested all the players who would go on onto form the band that  would become Pearl Harbor and the Explosions.

The band flourished until 1992, when a madman shot and killed Naked in Golden Gate Park. Devastated, the band then took some time off to decide how to proceed.

Fortuitously, a stroke of good luck happened when Gates happened to be in the same bar as Van Morrison and was introduced by a mutual friend. Morrison made the generous proposal that Pearl Harbor and the Explosions join the bill for his San Francisco show.

The band hired Lee Vilensky to play bass and from there on were able to continue, a few years later recording the album Here Come Trouble, that was dedicated to Naked.

Regarding her recent single, Harbour said: “Oh yeah she’s driving to lovers lane in her cool pink caddy and missing out on some fun while waiting on your man. Again he’s missing in action so I put on the radio, turning the dial and listen. This song makes me fuzzy all inside, I’m in control… ‘I wish I were you, so I can make love to me.’’’

You can stream/buy  ‘I Wish I Were You’ here, and ‘Trouble’ here as well as watch the videos to both here at RAMzine.