Rabid Bitch Of The North unleash video for ‘Green Eyes’ 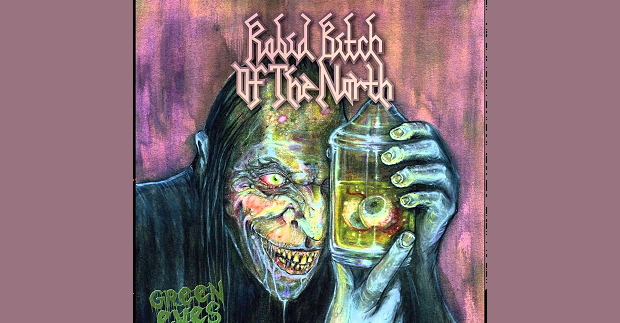 Double denim, patches, facial hair and a taste of the olde, the Rabid Bitch of the North bring the NWOBHM with Northern Irish charm to the world with their outstanding new single ‘Green Eyes’.

Available on 7” vinyl via Greek Label Alone Records, the new single ‘Green Eyes’ comes with a second new track ‘Your Misery’ as a double A side release, all supported with a music video for ‘Green Eyes’. RBOTN are hammering their flag in the ground continuing the styles of those that lead the way before them. ‘Green Eyes’ is the perfect example that good music is good music, and needs nothing to try and out do itself to prove a point.

Through their seven year lifetime, they have pierced through the world of metal that is forever growing and proven their worth finding support slots with Hell, Blitzkrieg, Portrait and Pagan Altar. With a steady growth in recent years following the release of the old school cassette single ‘Defending Two Castles’ which sold worldwide, and thanks to the rave reviews for the raw, unrelenting metal spirit, steady press coverage has cemented RBOTN as future kings of traditional heavy metal.

Claiming slots on Ireland’s Siege of Limerick and the UK’s favourite Bloodstock since the last single release, they show no signs of slowing by grabbing UK tour support slots with Portrait, Angel Witch and another showing at Siege of Limerick. Not the mention breaching the borders and hitting Europe in support of legends Diamond Head and Raven.

This year has seen the release of their ‘Green Eyes’ single and compilations CD album of their back catalogue ‘From the Kennel to the Castle’. Expect many more tours and festival announcements to come as the 2016 progresses, and as Rabid Bitch of the North grows, expect to be bit … hard!