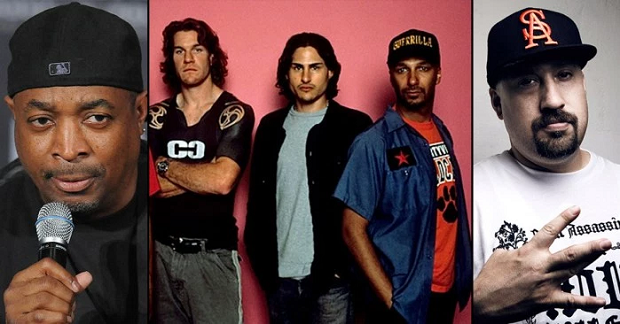 There was much speculation in the past week about legendary rap-rock band Rage Against The Machine reforming due to a mysterious countdown to June 1st on their website, and posters appearing  around Los Angles with the slogan ‘#TakeThePowerBack’.

Sources told Billboard that this a supergroup formed of RATM core members Tom Morello, Tim Commerford and Brad Wilk with Public Enemy rap icon Chuck D, and equally influential Cypress Hill rapper B Real taking vocal duties. (RATM front-man Zach De La Rocha is not involved with the project). This band will be known as ‘Prophets Of Rage’ and will perform tracks from each group.

The name is taken from a Public Enemy track of the same name.  The band’s first performance is set for Hollywood Palladium on June 3, as well as a show at L.A.’s Whisky a Go Go planned. A 2016 summer tour is also being considered.

Guitarist Tom Morello has collaborated with rap acts such as Run DMC,  Wu Tang Clan and even Snoop Dogg in the past. Morello, along with Brad Wilk and Tim Commerford famously formed Audioslave with Soundgarden vocalist Chris Cornell in 2001.

Chuck D and B Real are no strangers to the world of rock either – having collaborated with Anthrax, Sonic Youth and Pearl Jam between them.

Below are a few tracks they may perform live:

Check out the countdown yourself at: