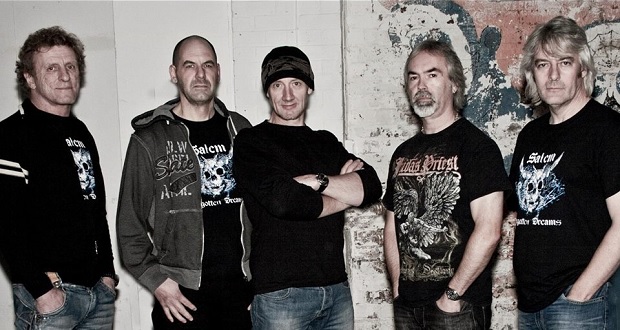 NWOBHM stalwarts Salem have release new track ‘Taking Control’ First single from upcoming new album Attrition.
formed in 1979 and built a strong following with their heavy rock based on thundering rhythms, soaring twin-guitars and powerful melodies.
Salem’s 1982 single sold globally and continued gig across the northeast of England before folding in May 1983 but In 2010, Salem’s original recordings were released on the album In The Beginning. This attracted great interest, so the band reformed and played its first gig in twenty-seven years! In 2011, Salem recorded three new tracks for the New Tricks limited edition EP and played again to launch the EP.
Ever since the band have tirelessly gigged across the UK and Europe at such names as the Heavy Metal Festival V in Italy, Negasonic and Ages of Metal in Belgium, and back home at the Metieval Winterfest back in Hull, ildfire Festival, Scotland (with Diamond Head, TEN, Empire, Tygers of Pan Tang…to name but a few. they have also been busy in the studio they released “Dark Days”on 29th April 2016 which was recorded at Hairy Monster Studios again this included a collaboration with Manny Charlton of nazereth fame and has been described as, “simply flawless from start to finish” and is considered one to the top albums of 2016.
2018 is off to a great start SALEM are currently setting up shows to promote the new record. Already booked is an appearance at The Big Barn Rally at Whitebottom Farm in Stockport between May 24th and 27th. you can check out the new single ‘Taking Control’ here:
Share
Facebook
Twitter
Pinterest
Linkedin
Email
Print
Mix
Previous articleMabel Greer’s Toyshop – The Secret
Next articleMonolord announce European tour with Conan