SATYRICON call it ‘The Dawn Of A New Age’, as they set out on an odyssey across Europe. The tour will honor the release of the band’s upcoming deluxe double CD/DVD box set, ‘SATYRICON – Live At The Opera‘ which is set for a March 2015 release. The set will also be available on a vinyl format. The boxset was recorded and filmed at a unique evening at the Norwegian National Opera House and saw the band performing with the renowned Norwegian National Opera chorus.

Frontman and band visionary Satyr informs us: “I want to do this tour to complete the circle on the ‘SATYRICON’ album and get behind the ‘Live At The Opera’ set, which is as far away from a conventional live album as you can get. I also want to share that experience with our fans in our «hometown», Europe”.

We can expect lot’s of new material on these dates as Satyr also tells us that the band are actually working on two more records simultaneously!

Satyr continues: “‘The Dawn Of A New Age 2015‘ tour is a great arena for us to play some out of the ordinary shows. We plan on playing songs that we never play live, we plan on doing live jam sessions, and we want this to be a real ‘event’, not just a tour supporting the release of an album. We don’t play as many live shows as we used to and we like it that way. These days we spend a lot of time in our studio and music has never felt so good.” “In 2015, you will get to see the beginning of the new SATYRICON which is a band that is waving goodbye to the pre-set formulas of the music industry.  You can’t vote on songs for us to play, there won’t be any lame sponsors, but if you play an instrument particularly well, get in touch with us and come jam with us on stage – or you can just enjoy watching. This tour is to celebrate our relationship with our fans.  I think this has the potential of being our best tour ever and I know it’s going to be absolutely fantastic”.

What a great idea, and really great way for fellow musicians and fans to get involved with the show. We hope to see more like this in 2015! After all this is the future now, and surly more interactive gigs should exist!?

The UK dates are as follows:

Tickets are on sale now, priced £15.50 for Manchester and £17.50 for London (subject to booking fee) and are available from www.livenation.co.uk. 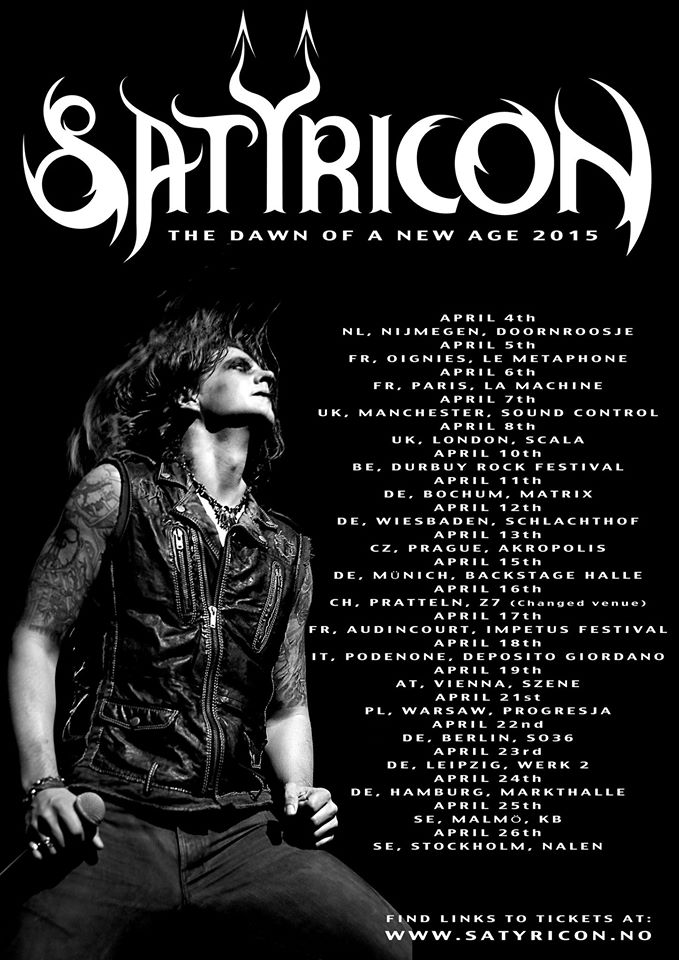