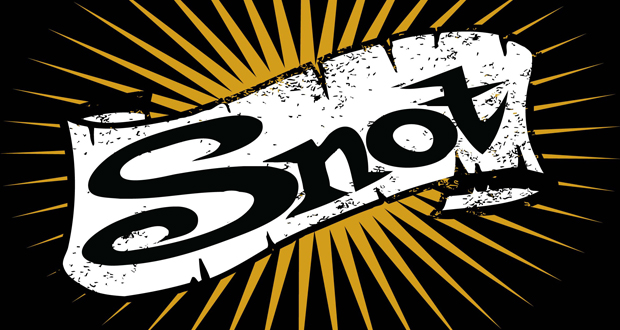 17 years on from the genre defining and cult classic debut album ‘Get Some’, Cali hardcore punk metal maestros SNOT finally hit our shores back in February this year. Having already toured the US in the late 90’s with titans such as Deftones, Machine Head and Incubus, the quintet were well on their way to achieving equally huge levels of success and notoriety. Who could possibly forget Ozzfest ’98 when lead vocalist Lynn Strait was arrested for indecent exposure after popping out of Limp Bizkit’s 13 foot toilet stage prop. Completely naked. And appearing to be receiving oral sex in front of 20,000 fans. Rock and roll indeed!

In late 2000, ‘Strait Up’, a tribute album to Strait (who tragically passed away in a car accident in 1998) was released on Immortal Records. It featured the music slated to be on the next SNOT album with guest vocals by the likes of Serj Tankian (System Of A Down), Corey Taylor (Slipknot), and Jonathan Davis (Korn) to name but a few. The remaining members would embark on two further tours with a guest vocalist (Divine Heresy’s Tommy Vext) but decided to return to hiatus once these had concluded.

The aforementioned UK jaunt was the band’s first ever tour across the pond, and the guys used this as an opportunity to pay homage to Lynn by playing that eponymous record in full during those shows. If you were not fortunate enough to catch the band in action earlier this year then fear not – Snot are back in Blighty this July. They’ll be supporting nu-metal icons Korn on their 20th anniversary run AND treating fans to more “Get Some” played-in-full gigs. Vocalist Carl Bensley from LA based band VITIATE will be filling the shoes of Lynn Strait on this one. Oh hell yes!

We have provided all the venue info and dates you’ll need below:

Tickets are available now from the links above or www.seetickets.com.

See you down the front! \m/