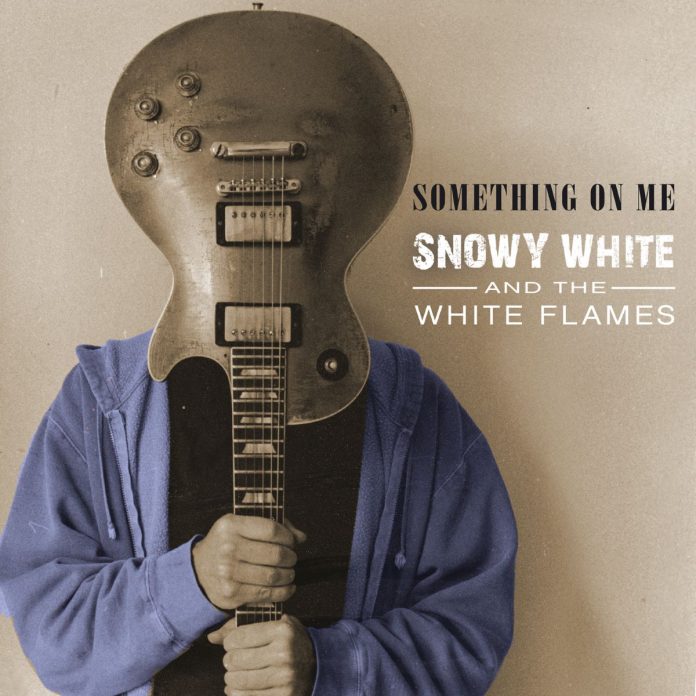 Snowy White & The White Flames‘ new album is out now and titled Something On Me.

One of a handful of classic blues-orientated British electric guitar players – musicians whose sound, technique and style has echoed the originality of the blues with the excitement of contemporary rock, White has developed his own style of English blues: a combination of clear, clean blues phrases and harder-edged riffs that are a recognisable feature of his very personal songs.

In the seventies White toured the east coast of America, getting as far south as New Orleans and discovering that he thoroughly enjoyed being “on the road”. He had by then become friendly with legendary English blues guitarist Peter Green, of Fleetwood Mac fame, and they spent a lot of time jamming together. In the Autumn of 1976, he was invited to tour America and Europe with Pink Floyd as their first augmenting musician, then the following year the band’s keyboard player Rick Wright asked him to play guitar on his solo album, Wet Dream, recorded in the South of France.

In 1979, Peter Green decided to head for the studio once more and invited White and his band along to jam. The result was the album entitled In The Skies, now something of a collector’s item. White was then asked by Pink Floyd to go to America to rehearse their new show for The Wall, and, at the same time, the rock band Thin Lizzy invited him to become a full-time member. So, after the completion of the Floyd’s US dates, he returned to England and went straight into the studio to record his first Thin Lizzy album Chinatown. Snowy stayed with the band for nearly three years of touring, recording Renegade with them in 1982, before leaving to pursue his solo career.

White’s first solo album was entitled White Flames, that included the self-penned ‘Bird Of Paradise’, and became a hit single around the world. In 1987, he put together a blues-orientated outfit, The Blues Agency, recording two albums, Change My Life and Open For Business. Between 1993 and 2000, he toured and recorded with two Dutch-Indonesian musicians, Juan van Emmerloot (drums/percussion) and Walter Latupeirissa (bass and rhythm guitar), and as The White Flames released albums such as No Faith Required, Restless, The Way It Is and Realistic while performing internationally. In more recent times the band has been augmented by celebrated keyboard player Max Middleton (Jeff Beck Group, John Martyn, Hummingbird etc).

Every year from1999 to 2014 Snowy White toured worldwide with Roger Waters on his immense tours, and in between tours, founded the Snowy White Blues Project, recording the albums In Our Time Of Living and In Our Time…Live. His most recent album was 2018’s The Situation while  Something On Me, due on 9th October, features Thomas White on drums, Rowan Bassett on bass and appearances by various members of The White Flames.

Tracks featured on Something On Me are: ‘Something On Me’, ‘Another Blue Night’, ‘Another Life’, ‘Get Responsible’, ‘Cool Down’, ‘Ain’t Gonna Lean On You’, ‘It’s Only The Blues’, ‘Commercial Suicide’, ‘I Wish I Could’, ‘Whiteflames Chill’ and ‘One More Traveller’.

‘I Wish I Could’ was recorded as single a while back, and they have just followed that with ‘Another Blue Night’.

Something On Me is available on CD from here, digitally on Apple, and both formats at Amazon.