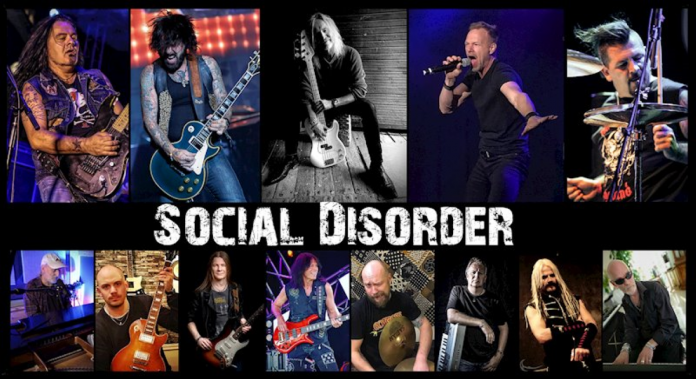 Their debut album Love 2 Be Hated came out in June, Social Disorder having been instigated by Anders LA Rönnblom – best known as the founder and songwriter for Killer Bee and X-Romance as well as a member of Wolfpakk.

The concept evolved into a journey through his own life.  The result 10 rock anthems, each with a message, as it takes on a period in his life, not least his struggles with alcoholism.

However, they say you shouldn’t judge a book by its cover, for while singer Thomas Nordin was something of an unknown, word had it that he is “an uncut diamond from northern Sweden who refines this masterpiece record with his incredible and distinctive voice!”

“Signing a band like Social Disorder, a band that will experience its debut with us, always comes with a certain amount of risk, but we definitely consider ourselves up to it!” claimed AFM Records.

“The recordings are bursting of heart and power. The band members are all veterans who have been through the motions of countless tours, recordings and one or another complication. This feeling is also reflected in Anders’ songwriting. The excitement and yet the danger of a downfall. A constant interplay of emotions. The whole album presents a journey into Anders’ soul and we are more than grateful to him for giving us this inside view.”

According to Rönnblom, Social Disorder was never planned to be what it turned out to be. As he got deeper into the songwriting he contacted Tracii Guns, Rudy Sarzo and Killer Bee bandmate Shawn Duncan about taking part in the recordings. Even though they are his songs and it’s his story, Love 2 Be Hated is a team effort, with everyone involved adding their own touch and spice to the songs. In fact, it was important for Rönnblom that everyone involved put themselves into each song.

While Rönnblom also wrote the lyrics to capture the events of his life in music, Love 2 Be Hated is not and should not be regarded as a concept album. The goal was to have his story touch people and give the listener something they can relate to.

“The lyrics are open to interpretation,” said Rönnblom. “This is my story, sure, but if that story draws people in and makes them say ‘Hey, this could be me…’ and they take away something inspirational or positive from these songs I couldn’t be happier.”

Love 2 Be Hated was produced by Anders LA Rönnblom and mixed by Mårten Eriksson at Fanclub Production in Stockholm, Sweden. The album was mastered by Svante Forsbäck at Chartmakers Audio Mastering in Finland (Rammstein, Entombed, Volbeat, Amaranthe).

You can rder the album here and check out the videos for the various singles released thus far right here at RAMzine.