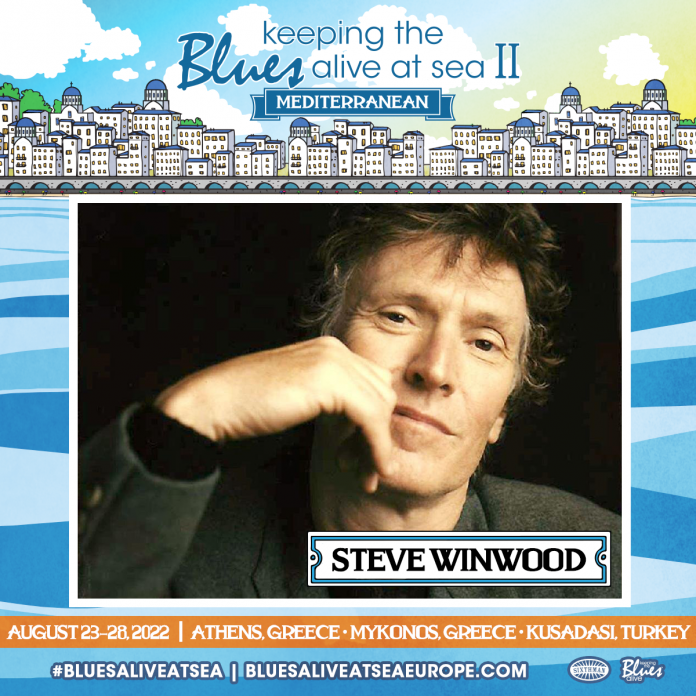 Legendary singer and keyboard player Steve Winwood started out playing piano underage at The Golden Eagle Pub in Birmingham before songs he recorded with The Spencer Davis Group took him to the top of swinging sixties’ pop charts. Similar success, and internationally too, followed with Traffic, and he even formed the world first official “supergroup” in Blind Faith.

All this and a successful solo career to this day, that has taken in Ivor Novello and Grammy awards alongside being inducted in the Rock & Roll Hall of Fame act as calling card.

Now, a septuagenarian, he leads the way as he’s often done in the past, showing there’s much life still left in the music industry despite the coronavirus pandemic’s attempts to prove otherwise with the announcement that he will be taking part in next year’s Keeping the Blues Alive at Sea II Mediterranean Cruise that is scheduled to set sail on 23rd through to 28th next year.

Founded by guitarist Joe Bonamassa and the Keeping the Blues Alive Foundation, in partnership with Sixthman, the cruise, is scheduled to set sail on 23rd August 2022 from Athens, Greece and over seven days take in Mykonos, Greece and dock on 28th of that month at Kusadasi, Turkey.

As with the previous cruises, the second European cruise will feature music across multiple stages, curated music-centric activities, and one-of-a-kind collaborative sets from blues legends – Notably one with Steve Winwood and Joe Bonamassa together.

Expect the cruise to sell out so if you need more information about booking this musical vacation, visit bluesaliveatseaeurope.com or call Sixthman directly at +44 808 164 1488 between the hours of 10am EST and 6pm EST.