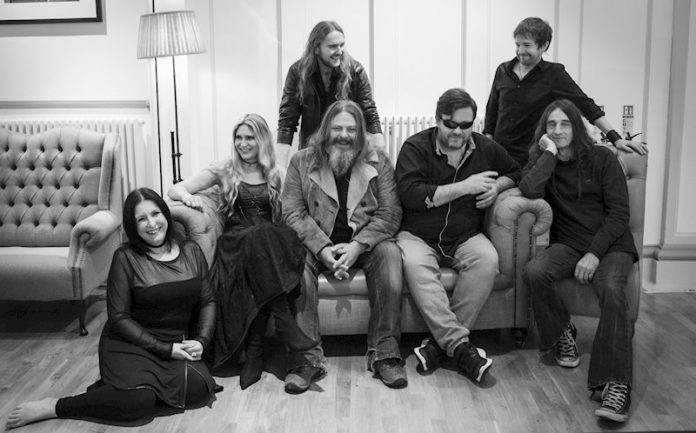 Mostly Autumn have been around since 1995 and, admirably, have always maintained their independence from big labels and the pressure that brings: they’ve grown a huge fanbase through hard work, constant touring (current situation notwithstanding) and by my count, now release their fourteenth studio album. Called Graveyard Star, it continues their trademark rock, prog, folk melange that they have always been so peerless at. The tracks are a reflection on and a document of their time during the pandemic. The seven-person lineup also welcomed Troy Donockley of Nightwish and Chris Leslie of Fairport Convention as guests.

To be honest, I latched onto them after Ritchie Blackmore praised them so highly and, whilst I was expecting the mediaeval in tights stuff, was pleasantly surprised by their complexity, accessibility and overarching skills on every instrument. Every release since then has been of very high quality with impeccable playing… the latest, despite the grim title, is no exception. As Bryan says: “The album is a deep, heartfelt reflection of how we were feeling through 2020 / 2021, a documentation of living through the pandemic. Although a lot of the sadness and otherworldliness was personal to us, I’m sure many will relate to the content”.

The synth build up on the title track encapsulates the darkness we’re approaching as the story unfolds with Chris and Olivia combing their vocals with drama and melody. The genius of the guitar solo adds to the drama spectacularly before it cuts to the acoustic denouement.

‘Skin of Mankind’ is a bit of a departure as the band mount up and ride out into the desert wastes: it’s bloody catchy and damnably clever too with the best violin solo this side of Nigel Kennedy. ‘Shadows’ is evocative of the title; a Lady in Black style acoustic start and then a neat rock interpretation of the melodies and a cracking guitar solo. Closer, ‘Turn Around Slowly’ is another twelve-minute track that passes in an instant which is a measure of quality.

There may be no massive surprises here: it is just an album packed with Mostly Autumn fruitfulness and goodness, if you’re a fan, you will adore this album; if not, give it a try for the highest quality progressive folk rock if you must have a label.

On tour in the UK in September and December; Graveyard Star is out now (The limited edition run of 2,000 is already sold out)