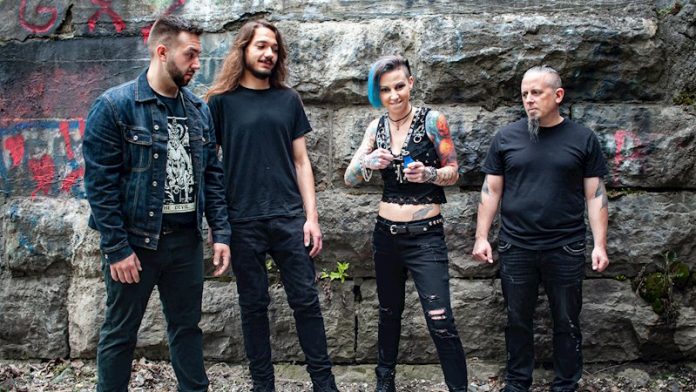 Stephanie Wlosinski (vocals, bass), Mike Bress (guitar, keyboard), Kenny Blesy (lead guitar), Tom Lafferty (drums) are the crew from Buffalo that make up the delightfully named band, Hearts & Hand Grenades. After impressing Robby Takac of the Goo Goo Dolls, who gave them the use of his studio, they released an EP and album, the latter to much acclaim in January this year. The slight easing of pandemic restrictions meant they got together again and have a new offering called Between The Lines. (By the way, Mike Bress is also a seventh-degree black belt, so be careful in the mosh pit!)

It is a step forwards and upwards to that debut as the writing has gelled and their true individuality shines through. Listen to lead off track, ‘Scream It Out’ that has a Metallic(a) edge as Stephanie’s controlled and powerful vocals brings bite and melody.

The single, ‘Bad Medicine’ delivers melodic punk attitude with proper rock and a catchy join in chorus and a brilliant guitar solo…. everything a single should be. The title track highlights the perils of (anti)social media to a soundtrack of a hefty riff and some serious good drum shuffles that add up to a helluva good song from every angle. ‘Black Sunset’ is an early favourite as (in my mind anyway) I hear Blondie or The Pretenders playing heavy rock, and playing it well. ‘Tragedy’ is very NWOBHM (as is ‘Wait’) in the intro riffing and the vocals are particularly strong.

This is a strong, varied and enjoyable rock album with shades of heavy and melodic wrapped in a neat parcel.

Between The Lines is out on 19th November on Eclipse Records.