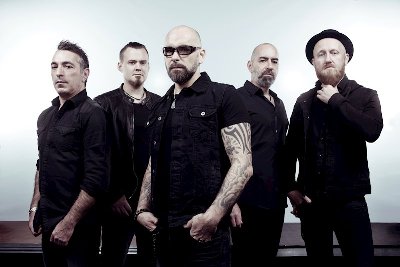 Tri State Corner pre-empt the release their new album Hero on 27th April through Drakkar Entertainment with new video ‘Downfall’ that you can view here at Ramzine.

Tri-State Corner began 13 years ago when ive guys from Greece, Poland and Germany set off to revolutionise the music scene by integrating a Greek lute (a Bouzouki), into their catchy rock songs, and by equipping their mainly English lyrics with passages sung in the Greek language.  Now with four studio productions and 450 live shows under their belts, Vassilios ‘Lucky’ Maniatopoulos (Vocals, darbuka), Ioannis ‘Janni’ Maniatopoulos (Bouzouki, vocals), Markuz Berger (Bass), Christos Efthimiadis (drums) and Christoph ‘Brat’  Tkocz (Guitars, backing vocals)have built up a large and still growing fan base.

In between their last album and Hero the band members have been active elsewhere. Maniatopoulos plays drums in German power metal legend Rage, while Tri-State Corner’s Efthimiadis also plays in Refuge and Tkocz is heavily involved in production work but all returned to put in 100% effort on this their fifth studio album.

Hero is the final part of the trilogy that began with 2011’s Historia that told the story of a migrant, who in the past departed to a foreign country to seek good fortune and eventually found it. It was followed by 2014’s Home that told the story of the former migrant’s descendants in the present time, while Hero takes a critical outlook on the future while looking at today’s world situation and poses the question in what direction mankind is headed.

“In the context of the album it means that, due to the fear of change, we would rather continue to follow existing patterns instead of turning away and perhaps aim for a better or more peaceful path. Even if we know that the course of events is questionable, we seem to avoid being taken out of our comfort zone and instead keep on following the familiar, but perhaps not right way.”

Tri State Corner’s Hero is their darkest album so far in that the lyrics draw a bleak picture of the future. In a time of causal loss of value and a two-class society the band’s intention with the record is for listeners to discover the hero within themselves, and to actively determine their lives again.

Tracks featured on Hero are ‘Fortune In Lies’, ‘Tomorrowland’, ‘Daydreamer’, ‘Save My World’, ‘Follow Me Blindly’, ‘Downfall’, ‘Hero’, ‘Voices’, ‘Breaking News’, ‘Wanted’ and ‘In The Blink Of An Eye’. The album can be pre-ordered by clicking here.