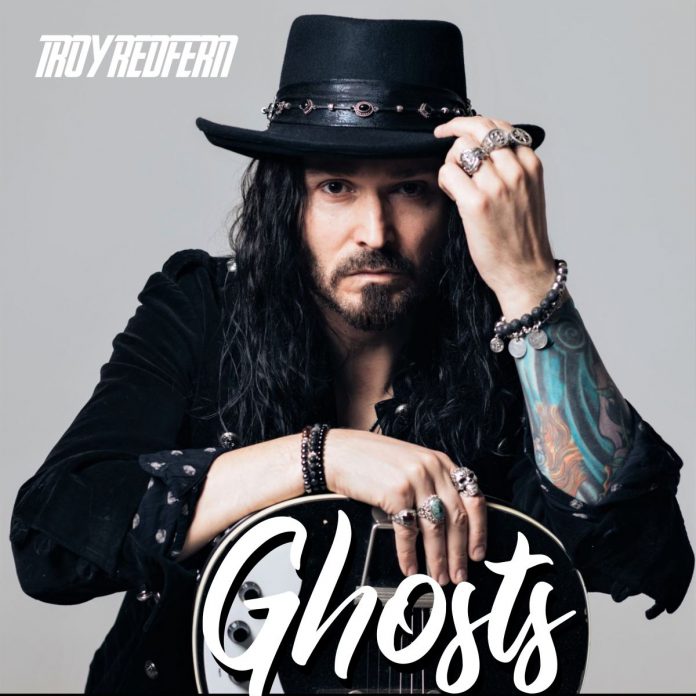 Currently being hailed as “the king of British slide guitar”, Troy Redfern, has released a free download of a brand-new song called ‘Ghosts’ taken from his upcoming album The Fire Cosmic that will be released 6th August.

‘Ghosts‘ follows a character that first appeared in the song ‘The Line‘ from Redfern’s previous album Dirt Blues Ritual.

The song opens with an atmospheric Appalachian style motif, played on Redfern’s trademark sound performed with a heavily-worn 1929 National Triolian resonator guitar, and it set the stylistic tone of his new studio album.

Against the backdrop of Darby Todd’s train beat drum shuffle, ‘Ghosts’ gradually builds with subtly-layered acoustic textures, as it builds its way towards a massive chorus. Dave Marks’ understated country feel bassline underpinning the verses, while opting for sonic waves in the solo section. Meanwhile Redfern’s resonator guitar, surfs, ducks, weaves, and reaches its final climax before hitting the chorus in high gear.

You can download the single ‘Ghosts’ for yourselves by clicking here and watch the video for it right here at RAMzine.

Troy Redfern is special guest on Robert Jon & The Wreck’s September 2021 UK tour, that you can read about at RAMzine here.

Thereafter, in the new year he tours the UK as special guest to Wille & The Bandits in March and April, and that you can read about at RAMzine here.

While guess what, for the full lowdown on Troy Redefern’s new album, The Fire Cosmic, check out RAMzine here, then pre-order it here.

And while you’re here, check out the video to his last single, ‘Waiting For your Love’.