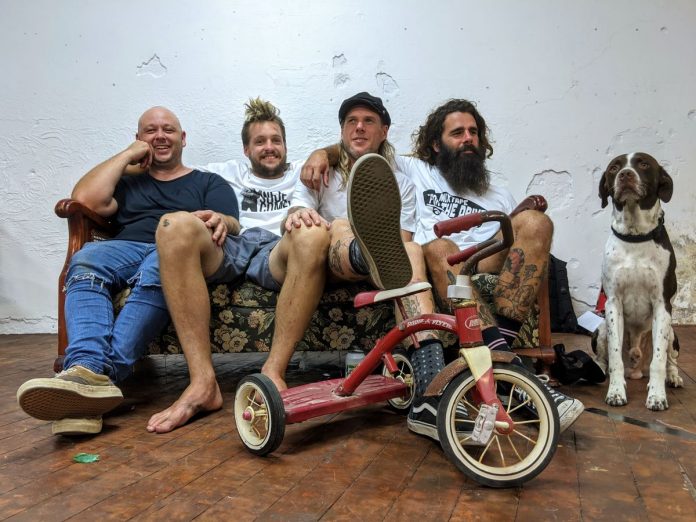 Australian punk act Under The Influence has released new single ‘Puerto Escondido’ via Riot Records on all digital platforms.

‘Puerto Escondido’ was inspired by a surf trip UTI’s guitarist took to Mexico a few years back, where he was violently threatened by locals to leave Puerto Escondido.

This song screams for equality and unity between different countries and cultures alike. We are all connected and need to work together. We’re all humans and the earth is our home. Shared with the animal kingdom, plants and fungi, Earth needs to be protected, respected and shared. If we can somehow find a way to work together there may still be hope for future generations.

You can watch the video to ‘Puerto Escondido’ here at RAMzine and order it here.

Tumbling back in time, nearly two decades ago, Under The Influence began as a trio who played locally. Original member Shane Kinerson (Kino) took care of the main vocals and drumming. On bass was Luke Malone (Moey) and on lead guitar was former member Glen Robinson. But things didn’t remain static.

In 2009 after several line-up changes, Chris Curci joined on bass and Moey jumped onto lead guitar. This line-up continued for the next few years and recorded the album Wasted Youth.

With solid feedback from Wasted Youth, Kino decided to step up his singing game and handed over the drum role (pun intended) to Daniel Southern (Chicken Wing). Going through UTI’s discography you can hear the focus on improving the music and their growth as a band, starting from street punk influences, to heavy punk hardcore.

In 2019, UTI released the album Exchange My Brain on Riot Records, alongside their first single ‘Propaganda Leaks’ that was not only received well in Australia but Europe too.

In November 2020, Under The Influence released ‘Body Parts’  that was intended as real-life psychosis in a song. It’s dark, it’s diverse, it’s crazy and it’s real… Or was it really a dream? As the band declared: “Whilst living a life built on lies, deception and stress You find yourself slowly falling and dealing with psychotic episodes and hallucinations of your own demise. Which include witnessing your own body parts scattered across the road. It’s a fiery cauldron of mental confusion.”

The band followed that with an acoustic version of  ‘Propaganda Leaks’. “’Propaganda Leaks (Acoustic Version)’ is a heartfelt track about losing life or love due to struggling with society and its many downfalls. It was originally the single from our previous album Exchange My Brain. But this acoustic version is the brain-child of our fearless drummer Dan Southern aka (Chicken Wing) sometimes referred to as ‘the wing commander’.

“He came up with the concept of this while experimenting with this as an acoustic track. Although this track couldn’t have been done without the help of a very talented friend Billy Demos on piano and guest vocals. This acoustic version showcases some raw emotion with a softer touch,” said the band.

After that came ‘Moon Flavoured Magnets’. The band described it as “a mystical magical poem” written for Mother Nature., and touches on “human greed, space, time, pollution and disrespect.” As the band note: “Sadly, most humans are on a self-driven vendetta. Without a care for what really matters or anything that’s connected to the natural world. The only hope I see for mankind is to reconnect to the moon and oceanic currents by the only way I know, magic of course. That’s what this song is about…. Magic.’’

In for a penny, they swiftly followed that with ‘Cobra Spit’, another ferocious blast of metallic hardcore punk, and a song about the manipulation of one’s better judgement by the narcissistic input of others around you.

Up next was ‘Gone’ due on 3rd May. ‘Gone’ holds a very special place in the guys’ hearts, dealing with the epidemic of mental health and the loss of someone close, while still being razor-sharp frenzied punk. “When you lose someone close to you it’s not easy. Mental health is so important. Self-medication through alcohol and drugs can lead you down a slippery slope of mental and physical decay, maybe until it’s too late. This track is about mental health issues, substance abuse and the death of friends and loved ones. Please take care of yourself and look out for those around you. This song is dedicated to the life of Pete Domio. Rest in peace Pete,’’ declared the band.

Back in July they brought out the single ‘Crows’ on Riot Records that you can stream/buy here. While for previous singles ‘Cobra Spit’ go here, Moon Flavoured Magnets’ here, ‘Body Parts’ here, ’Propaganda Leaks (Acoustic Version)’ here, and ‘Gone’ here.