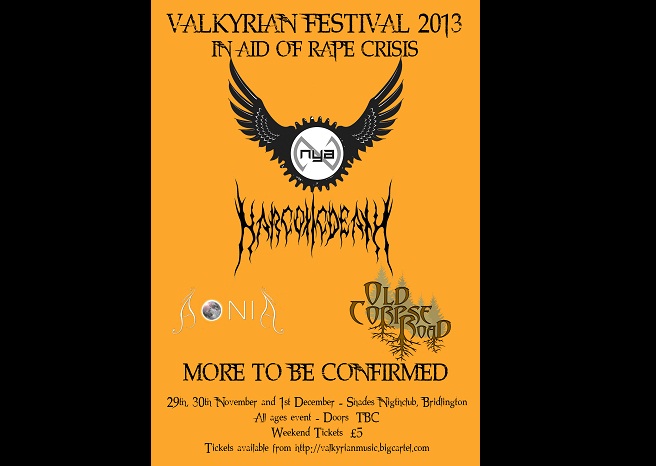 Valkyrian Festival have made their first announcement for this year’s edition of the event.

Nya, Narcotic Death, Old Corpse Road and Aonia will be making an appearance at the festival which is to be hosted by Shades Nightclub in Birdlington on 29th November – 1st December.

The festival organisers will also be holding a Battle of the Bands event with a slot to play at the festival as the top prize. The single round of the competition will be held on 27th April at Shades Nightclub with Lipstick Sunbeam, Seconds Apart and Fallen Angel already set to compete. The winner will be determined by the audience and tickets are £2 OTD.

This year’s Valkyrian Festival will be in support of RapeCrisis which is a UK based charity who give help and support to women who have been victims of sexual violence. There is already a JustGiving page set up to raise money before and after the festival. Donations can be made here.

Weekend tickets are £5 and are available from here. This includes entry to all 3 days and free entry to the after party each night which would otherwise be £1 to non-ticket holders.