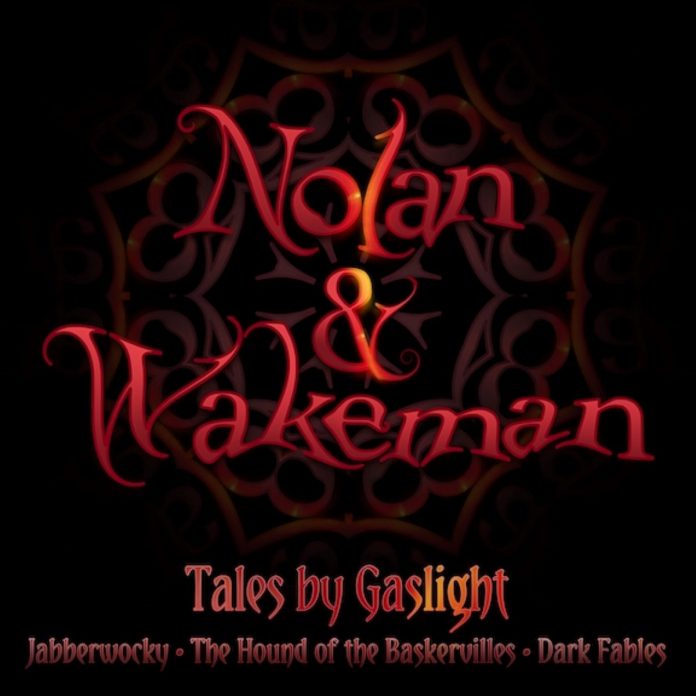 Oliver Wakeman reunites with Clive Nolan after 20 years to issue a 3CD Box Set – Tales By Gaslight featuring remastered versions of their “future prog classics” Jabberwocky and The Hound Of The Baskervilles along with a new disc Dark Fables.

To be released on 23rd April through Burning Shed, each CD of the Tales By Gaslight will feature a 16-page booklet including lyrics, previously unseen art work,  many stories behind the creativity from both Wakeman and Nolan, alongside individual art prints of the covers. The first 250 box sets will also include a 4th limited edition numbered art print of the box set cover signed by Nolan and Wakeman.

Jabberwocky, the first of these, was released in 1999, and based on the famous Lewis Carroll poem. It was followed by The Hound of The Baskervilles in 2002, that was obviously inspired by the Sherlock Holmes novel penned by Sir Arthur Conan Doyle. However, it transpires the pairing’s project was always intended to be a trilogy of musical interpretations of literary classics, but an album inspired by Mary Shelley’s Frankenstein was shelved because of a lack of record company funding.

From the Jabberwocky album, Wakeman and Nolan, recently released a lyric video for the track Coming To Town that you can see right here at RAMzine.

The box set package’s third disc, features previously unreleased pieces that were intended to complete the trilogy. Titled  Dark Fables it contains over 30 minutes of music conceived for the abandoned Frankenstein album.

Nolan and Wakeman also found pieces that were unused from The Hound of The Baskervilles. These include ‘The Man Called Sherlock’, what was the original version of the ‘Overture’ and ‘221B’, inspired by Sherlock Holmes’ famous address.

Unusually for the time, the first two albums featured a host of guest performances, including narration by Wakeman’s father Rick and actor Robert Powell.  Former YES guitarist, the late Peter Banks, Magnum vocalist Bob Catley and singer Tracy Hitchings appeared on both albums. Ayreon mastermind Arjen Lucassen lent his talent to The Hound of the Baskervilles along with members from the bands IQ and Threshold. The unique artwork was created by Rodney Matthews for the original Jabberwocky release.  Peter Pracownik was the creativity behind The Hound of The Baskervillesartwork 20 years ago and has returned to this trilogy by lending his talents to the new Dark Fables artwork.

In keeping with the spirit of the two previous albums, the new recordings feature the talents of, amongst others, Gordon Giltrap, Paul Manzi (Arena, Oliver Wakeman Band, Sweet) Andy Sears (Twelfth Night) and David Mark Pearce (Oliver Wakeman Band). Also included is an original reading of the Jabberwocky poem by Rick Wakeman.

The eldest son of the aforementioned prog legend, Oliver Wakeman filled the keyboard role, once held by his father, with YES from 2008 to 2011. His work with that band includes the triple live album  In The Present – Live From Lyon, Fly From Here and the From A Page box set featuring recordings from his time in the band and released in 2019. During his tenure with them, he also toured and recorded as a member of The Strawbs.

Wakeman released his own debut album in 1997. Titled Heaven’s Isle it was inspired by the island of Lundy, and has since released a number of solo and Oliver Wakeman Band albums.  He has also released several collaborations with renowned musicians, including YES guitarist Steve Howe for The Three Ages of Magickalbum, as well as uniting with another guitar legend in Gordon Giltrap for the award-winning Ravens & Lullabies album, both intended to be included as part of another upcoming box set.

Aged just sixteen, multi-instrumentalist Clive Nolan became the youngest musician (at that time) to gain an A.L.C.M. composition diploma from the London College of Music. At university he studied composition, orchestration, musical arrangement and conducting, gaining a BMus and MMus. He has played a prominent role in the development of progressive music, as a member of Pendragon since 1986 and as a member of Shadowland (1992 – present), Strangers on A Train (1993 – 1994) and by forming his own band Arena in 1995.

Nolan’s interest in rock opera extends beyond his collaborations with Wakeman. In 2008 he wrote She, based upon the novel by Sir H Rider Haggard, and two musicals Alchemy and King’s Ransom.  This year will also see the release of a new “Viking Inspired” album, Song of the Wildlands, as well as the new Arena album The Theory of Molecular Inheritance.

You can pre-orderTales By Gaslight by clicking here. Here at RAMzine we present you a teaser video from the album alongside the official lyric video for ‘Why Do You Hate Me?‘ a track featured on e Dark Fables album.