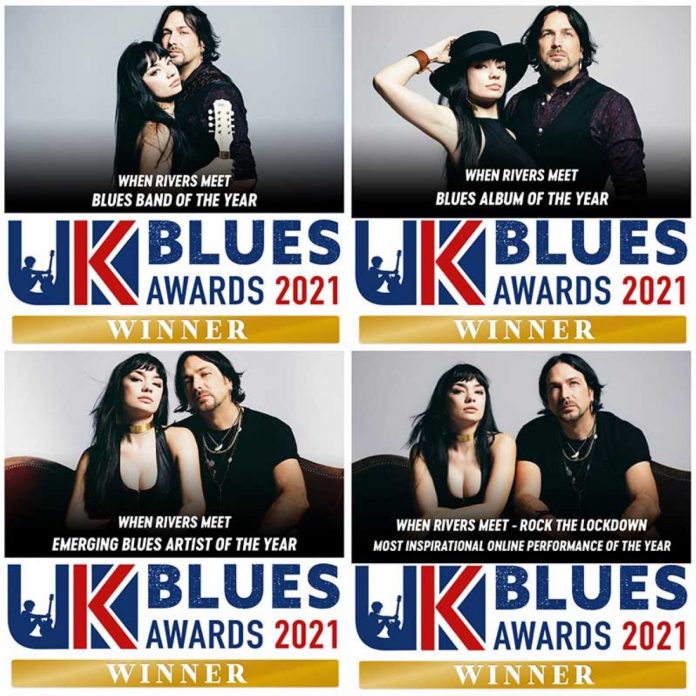 British Blues Rock husband and wife duo,AaronandGrace Bond of When Rivers Meet, are the first British Blues band to win four awards in the same year at the UK Blues Awards in London on Sunday 9th May.

Hosted by the legendary blues musician Paul Jones, the band won Best Blues Album Of The Year, Blues Band Of The Year, Emerging Blues Artist Of The Year, andMost Inspirational Online Performance Of The Year.

If you missed the awards ceremony last night, you can watch it on-demand via YouTube by clicking this dedicated link or direct here via RAMZine.

When Rivers Meet first caught the public eye with the release of their debut album We Fly Free in November 2020. Since then, their weekly Saturday night livestream concerts, reviews in the music press, and radio airplay on Planet Rock, BBC Radio 2, Radio Caroline, plus many more radio stations and shows, have seen them develop into one of the most sought-after blues rock bands in the past 12 months.

They were recently invited to perform a live stream performance of their single ‘Did I Break The Law’ on Joe Bonamassa’s Keeping the Blues Alive Stream-A-Thon where proceeds were raised to aid blues musicians affected by the pandemic.

Last month they were confirmed as special guests onKing King’s February 2021 UK tour and the band is also in the process of organising their first headline tour of the UK in 2022.

“We’re totally blown away to have won these awards,” said When Rivers Meet lead singer, mandolin and fiddle player, Grace Bond. “We started playing music together over ten years ago, and when we started out, we didn’t really know what direction we were going in until two years ago when we realised that blues rock was not only the music we listen to the most, but it’s also the music we love the most.”

She continued, “Aaron’s very first album was John Lee Hooker. He was hooked on the blues from an early age. It was inevitable that we would want to play the blues. I just can’t believe it took us as long as it did, but so glad we did and to receive such a prestigious award as the Emerging Blues Artist of the Yearis just amazing. We’re pleased that people like our sound and what we are doing.”

“When lockdown started, we didn’t know what we were going to do,” reflected Aaron Bond. “Like everyone else our live shows were cancelled, and we were unsure when music would start up again. We noticed other people jumping online so we thought, let’s give it a go. We started doing live stream performances through our iPhone, but looking back, we can honestly say it was the best thing we could have done.”

“Not only have we reached a bigger audience all over the world, but it also gave us something to strive for. Playing a gig every Saturday night to an amazing audience of people who have been so supportive over this last year, we just can’t even put it into words.

“To win the Most Inspirational Online Performance Of The Year award is a thank you to all the people who have supported us every single week. They not only got us through a hard year, but it also showed us that during the hardest times, people can come together and even just for an hour a week can enjoy themselves. We feel eternally grateful for the love and support that we have been shown on so many levels.”

“When we started recording our new sound that we had discovered a couple of years ago we were so excited for people to hear it,” said Grace Bond. “We had discovered our amazing producer Adam Bowers at Boat House Studios, Suffolk. We took our songs to him and he was so open to our ideas that it just felt like a perfect fit for us. We recorded two EPs with him and when it came to recording our debut album, we knew he was the only person we wanted to work with. At the end of recording, we were nervous because it was going to be the first time that we were going to release an album.

“To receive theBlues Album Of The Year award is incredible. We have been blown away by all the support not only in the industry by all the Radio DJ’s who have played our music and the magazines who have published reviews and written about us throughout the year, but also family and friends and all the fans who have given us such massive support. A huge shout out goes out to our awesome fans, the Rapids, for their belief and support.

“To receive the Blues Band Of The Yearaward is really heart-warming. We can’t thank people enough for their continued support of not only our music but of us. We love music, and we love the music we create and for other people to love our music and want to see hear and us play live is just awesome. We want to thank our families and friends for their continued support through the years and all our fans who are now known as the Rapids. Without them we wouldn’t have anybody to play to, so again this award is very much for all our Rapids.”

Currently recording their sophomore album, When Rivers Meet are looking to release it in November 2022. And, if you’re wondering what all the fuss is about get a free download of Blues Rock Review’s Album Sampler Volume 12 featuring When Rivers Meet’s latest single‘Walking On The Wire’ here.