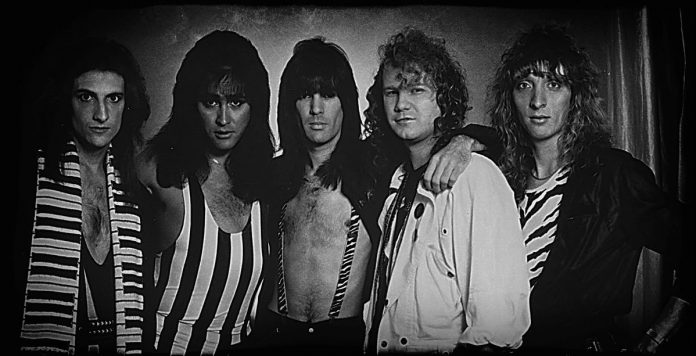 Cast your mind back to the mid-1980s, where if you happened to be in San Antonio, Texas it was one of North America’s hottest metal cities, chances are you might have caught sight of Heather Leather, Wyzard, the infamous S.A. Slayer or hometown heroes Winterkat.

Winterkat emerged from the Lone Star state with a sublime blend of pomp rock, progressive leanings, AOR sensibilities and hard rock muscle as documented on a pair of independently issued EPs that have since become vinyl collector’s items.

A precocious 16-year old in Liquid Sky, guitar prodigy Jonathan Grell jumped ship and along with vocalist Ric Swanson, keyboardist Jamie Vallejo, bassist Chris Watkins and drummer Tim Saunders recorded Winterkat’s debut 5 track EP. “Some of the members wanted to write more commercial type material so we parted ways and those guys went off and formed Nightwork,” recalled Grell. “I have remained friends with all of them though, Ric in particular. Sadly, he passed away last year.”

A musical anomaly amidst a sea of leather and spikes metal warriors, Winterkat would tour locally, recruiting three former members of local progsters Heyoka in vocalist Michael Steele Grothues, bassist Dean Vallecillo, and keyboardist/drummer Gerardo Ramirez, who had supported the likes of Rush, Van Halen, Budgie and Trapeze. They plus drummer Steven Marcus went onto record The Struggle

Marcus bowed out to go back to school, Gerardo took on drums full-time and another former Heyoka member in Paul Therell became the new keyboard player when The Struggle was eventually released in 1986, an expanded in 1988.

The five song EP took some surprising twists, including a unique take on Jimi Hendrix’s ‘Little Wing’ as well as ‘Minuet III’, a short J.S. Bach piece adapted by Grell. It wasn’t long before they were opening for Yngwie Malmsteen’s Rising Force and Bill Sheehan’s Talas and international press and record orders were coming in.

As we all know, the music business isn’t all that it’s cracked up to be and those that are the most deserving often miss that brass ring.  Winterkat were unable to capitalize on the momentum they had been building Bassist Dean Vallecillo left the band and joined Minneapolis based Dare Force and was replaced by Scott Womack (Juggernaut) and later Mike Mullins (Emerald). Grothues began going through some issues and, “sadly, we were not able to finish the third album”, said Grell.

“The band disintegrated just as we had recorded our best material. Very sad. I truly believe the third record would have landed us a bigger deal.”

Although Winterkat is no more, “we all keep in touch”, stated Grell who has lived in the Los Angeles, CA area for the past 25 years where he worked with the late, great Rhett Forrester, MSG’s Robin McAuley, and his own band, Mudpie, during the 1990s.  “I did fly back for Michael Grothues’ funeral in 2012.  We played a tribute show for Michael with a Winterkat version comprised of both line-ups: Ric Swanson, Chris Watkins, Gerardo Ramirez and myself. Heyoka members also performed. We all attended Michael’s funeral that weekend. Rest in peace, Michael.”

In 2019 The Struggle was reissued through 20th Century Music/Vanity Music Group, with the label adding bonus tracks to the recording: ‘Last Time’, ‘Ghost Of Legal Crime’, and ‘Cold The Blade’, all rescued from Jonathan Grell’s library of tapes. A glimpse of what the band had in store for the future that was not to be.

Now, a year after that release, Winterkat has decided they wanted the album to be available in digital format so it’s now available on nearly three dozen digital platforms across the globe, including iTunes, Spotify and more.