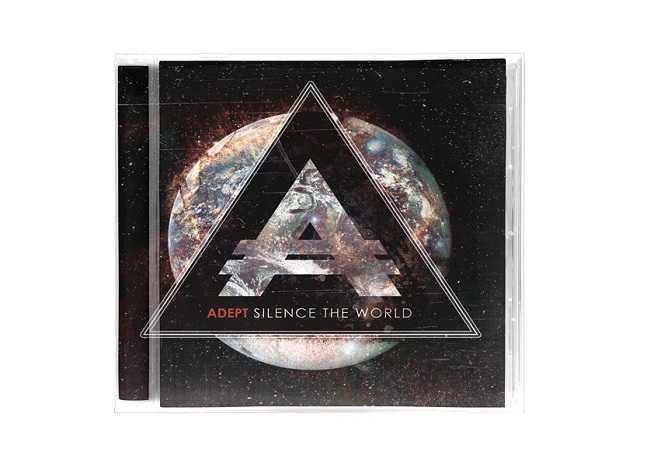 These days it seems like bands are constantly trying to straddle genres like an errant cowboy straddles two horses. This could be to appeal to the most amount of people, so the most amount of people will buy their music and come to their shows – the music industry is such, that bands can’t really afford to be picky about their fans. Whatever the reason may be, it is this modern cross-genre attitude that has lead to the creation of the new album, ‘Silence of the World’, from European crew Adept.

Check out the video for ‘Secrets’ from the Album below!

At first glance, some people may be tempted to pass this album off as “just another metalcore” album. These people need to give this album another chance. Delve deeper, and really get involved with it (and the band’s entire canon of work really) and you will notice that their influences span more than just simple metalcore. Ok, so there is obviously some metalcore influence in there, but some of the riffs are so heavy that they could have been taken off any European melo-death album that you could care to mention. A lot of the newer, more generic (and more boring) metalcore bands attempt to make their choruses sound increasingly more massive through the use of strings and synths and all that guff – Adept achieve that huge sound just using their instruments and some stellar clean vocals: this is where the post-hardcore influences really show through.

Adept‘s critics will say that this album has been done before, but better. True, each of the influences may have been done better: if you like melo-death, listen to Soilwork; if you like metalcore, listen to Killswitch Engage or Bury Tomorrow; if you like catchy post-hardcore, listen to Alexisonfire or Fightstar; but, I would argue that very few, if any, other bands have managed to combine all the previously mentioned styles in such a way. There may have been some that have tried, but you haven’t heard of them because they were rubbish – Adept have nailed it.