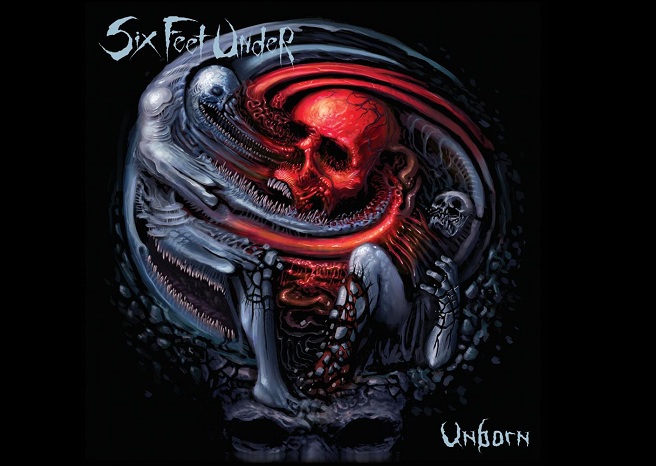 It was quite a surprise to hear Six Feet Under were bringing out another album as their previous was released less than a year ago. Buy hey, who am I to complain? That would be blasphemous! More metal = smiley faces all around. ‘Unborn’ is the 10th studio album from the death metal unit who have now been rocking out together for 20 years. That’s pretty monumental compared to the usual three-week lifespan of most bands these days.

It could be thought that after so long, the band might have lost their touch or become a bit mundane. Oh how wrong those people are… ‘Unborn’ is sheer brutality; death metal at it’s finest. Track after track, from the first title ‘Neuro Osmosis’, is full of savage shredding and throat ripping vocals. The fact they don’t have to play everything at superhero speed is great – it’s nice to actually hear the music properly, each song different to the previous.

Third track on the album, ‘Zombie Blood Curse’, stands out in particular with a riff made for head banging and it’s repetitive rhythm. It’s as if this song was made for people to swoosh their hair and go absolutely mental in the pit too. Everyone loves a bit of good ol’ metal chugging.

In between all the macabre massacre, Six Feet Under still show that they’re partial to a little more melody. ‘Decapitate’ is a fine example, starting off with something a little less heavy before diving into the dark once more. ‘Alive To Kill You’ is yet again different, with the music literally tearing your ear drums apart. It’s insanely fast, heavy and evil – fantastic! The changes in tone (although only slight) helps break the album up, making it thoroughly enjoyable.

With a bunch of guests appearing on the album, from Ben Savage from Whitechapel to Jari Laine from Torture Killer, the 10th studio album is marked greatly in Six Feet Under‘s books.

Not their best album yet, but still a true death metal trudger.