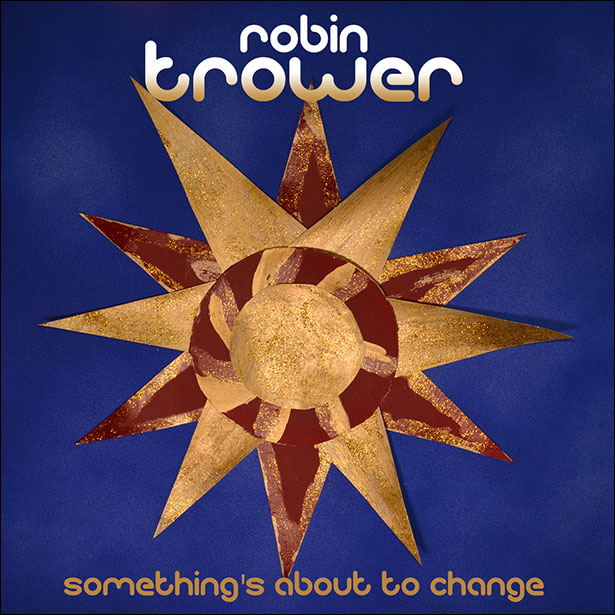 70s stadium super-stardom in the USA was not a manufactured thing. You could get on a major touring bill, pay payola to get a local chart hit, but you survived and made your reputation by standing on that stage, blowing the opposition away and turning on a stoned partying blue collar audience to the music you played. Armed with his Fender Stratocaster Robin Trower headed out west and did just that.

Signing off on Procol Harem after six albums and deciding the time wasn’t right for foundling supergroup Jude, he opted for the power trio format playing blues-drenched psychedelic rock where his foot tapping rhythmically over a wah-wah pedal  got him tagged “the white Jimi Hendrix”. For those of us too young to know, but still old enough to remember rifling through the racks at record shops, album titles like Twice Removed From Yesterday sounded either pretty hippy-trippy affairs or this new thang they were calling jazz fusion. In hindsight there may have been some of that, but what you predominantly heard was soul-screeching blues rock from a guitarist who wasn’t playing blind and erratically to feed his own ego, partnered by former Stone The Crows time bass player Jimmy Dewar who was gifted with a voice that swung emotionally somewhere between Frankie Miller and Paul Rogers’.  From the slam-dunk rock of ‘Day of The Eagle’ and ‘Too Rolling Stoned’ to the expository challenges of ‘Bridge of Sighs’ all off the 1974 hit album of the same name his reputation was made and a long-term career assured with it even now  grossing 15,000 copies sold annually worldwide, and that was just one of the records he made back then.

The ’80s onwards saw advances in studio production, and people miming to videos that could be viewed worldwide without the need for tour buses and road crews, so Trower took his foot off the wah-wah a little. He would continue to tour and record but on a less grand a scale, though in recent years that has meant the UK has seen him perform on British soil more often. He has also cast his net creatively recording albums with the late Jack Bruce, former Cream bassist/vocalist at one end of the musical spectrum and ex-Roxy Music singer Bryan Ferry at the other, while briefly rejoining Procul Harem in 1991. And now, depending on when you’re reading this; on March 9th 2015 the date of his 70th birthday he will have released his latest album Something’s About To Change on Manhaton/V12 Records and be about to embark on a new British tour.  What could a man this age possibly have to say or prove, and why bother in this supposedly dwindling record market? Well, maybe we will get to some theorising on that in a little while.

For now, turn your sound system up loud and listen to track one as that first deadbolt bass note resounds all the way to heaven so that Bruce and Dewar can look across from their angelic white clouds and give each other the thumbs up. A slow blues roll that shrugs out and strut its stuff ‘Something’s About To Change’ is a statement of intent; a rite of passage into the autumn of one’s life, with regret and sadness, not remorse, but knowing one has to bite that stiff upper lip and strive to find moments of contentment within it. As Trower’s fingers spread across the neck for his first guitar solo, it initially sounds all so deceptively simple but as you listen it moves and slides, holding notes of eloquent understatement and tempered fire and you quietly say to yourself “Wow!”

What this listener hadn’t expected was Trower’s voice. My initial presumption was that his handling vocals was a matter of economics, but research shows he also did so intermittently with Procul Harem, while the songs themselves indicate the real reason. Predominantly narratives, some may be incredibly personal; relating to the passing of the wife he had been married to since 1968 in February 2014. To that end, it needs to be him who sings them, rather than an interpreter. First impressions are that he sounds a little like Eric Clapton vocally; it’s that shrugging of the lower jaw to approximate those great big bear singers like Muddy Waters and Howlin’ Wolf but combined with an Englishman’s nasal qualities and diction, and where he lacks old Clappo’s crooning range the intimacy of the songs pulls them through, as on ‘What You Never Want To Do’ when he sings: “When the clock strikes midnight, that’s when I miss you most of all.” Trower also plays bass, with only Chris Taggart present throughout on drums, while Luke Smith pitches in on organ, and they do so almost protectively on some of the tracks, like the upbeat walking blues of ‘Fallen’.

‘Riff No. 7 (Still Alive)’ pulls in a funkier sound, with a cheeky riff and a knowing call-back reply   guitar lines to the song’s storyline. More so as he plays its first, brief, solo, it begins to explore notes, not for colour but meaning. This, as with the title track, is as near at it gets to his actual 70s rock star brief.  Whereas on ‘Dreams That Shone like Diamond’  the song reveals both the highs and lows of a musician’s career, the choice of notes and the way they’re held, with controlled expressive soul during the main guitar solo is again something to hear.  ‘What You Never Want To Do’ is a sloping, wide-angled lazy riffed pimped-up blues rocker of the sort Joe Bonamassa tested the waters with on his recent Different Shade of Blue, but needs to listen to this to get it right. The syncopated voodoo blues of ‘Strange Love’ is again lyrically poignant with the lines “She was everything” and the sustained solo, with just the slightest of echo pulls out delicate telling notes, warmed and caressed by Smith and held in check by Taggart’s rock steady supporting beat. The slow salsa funk blues of ‘Gold To Grey’ do make you wonder how Dewar might have sung it, as does the funk chord chopping ‘The One Saving Grace’ that marries a sense of black humour into its graven lyrics and is further counterpointed by a series of upbeat shoot-from-the hip solos.

There are sad songs for sure on Something’s About To Change but there is an underlying warmth that beats throughout it too. Long-time Robin Trower fans are unlikely to be disappointed, and anyone wanting to play guitar simply has to listen to master class like this at least once in their life. With Robin Trower gearing up to tour the UK with Joanne Shaw Taylor as special guest as I type this, I suspect it is going to be one hot ticket. 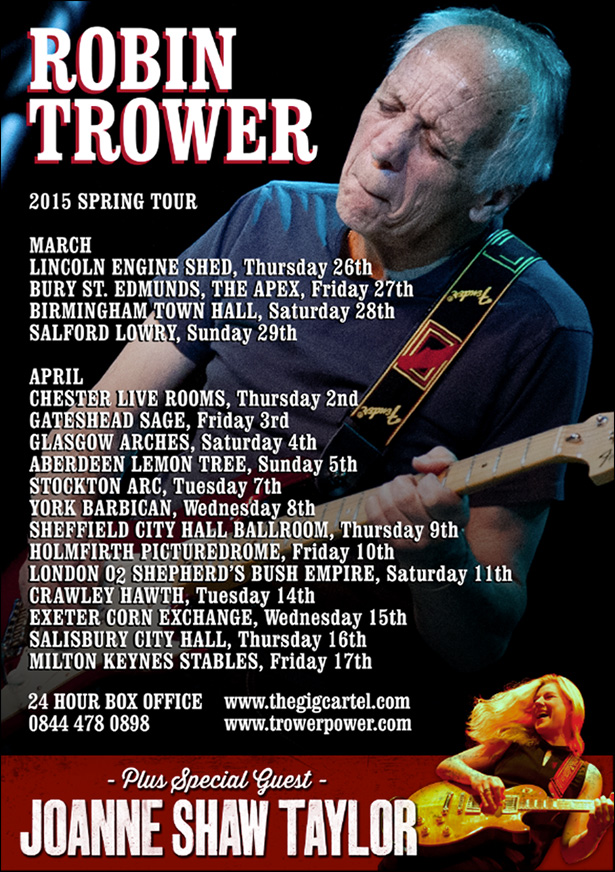