Into The Unknown – Out of The Shadows 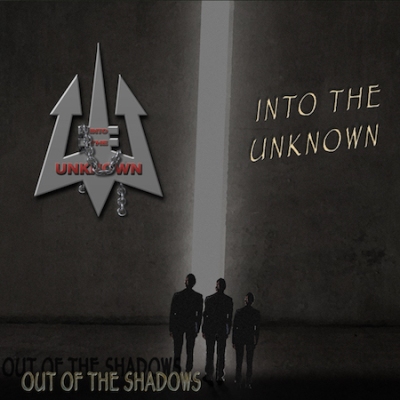 There are nine tracks featured across the length of Into The Unknown’s debut album Out of The Shadows, two being cover versions, the remainder co-written by vocalist Lucie Hölzlová, guitarist Ryan Atkins and bassist/producer Rupert Withers.

First up is a cover of Chris de Burgh’s ‘Don’t Pay The Ferryman’. However, if all you’ve heard by the man are easy listening smash hits like ‘Lady in Red’ you might be surprised to find out his earlier singer/songwriter work was held in high regard within rock circles, and he toured as support to bands like Supertramp. Into The Unknown have re-imagined the largely acoustic original into a work that begins with suspenseful anticipation before a Zeppelin-styled ‘Immigrant Song’ scream hurls the band headlong into an urgent  hard rocking number with added electronica and effects.

It’s followed by  Real Life Superman’ where over a mangled fuzzed-up riff, clunking bass and thundering drums, echo treated vocals range from the manic screams of the childhood nursery to the worldly wise with a wall-crawling guitar solo thrown in to offer a rather doom-driven prog feel .More heavily distorted thrashing of chords are bashed out to announce ‘Why Me’ before developing into a more regular rock number with foghorn echoed vocals running over, akin to a punky Girlschool with a shoot-from-the-hip guitar solo that suddenly slows to a textured keyboard and classical guitar sect before returning for a more wiry feedbacking guitar soloing through the last verse.

Atkins’ guitar sound is definitely the thing that gets your attention, often opting for a sharp squeak more favoured by Television or The Velvet Underground than a straight down the line rock band, but with Withers’ bass opting towards a chunky treble sound, and Hölzlová’s vocals often treated with effects, Into The Unknown play only loosely in that ballpark.

‘We Are One’ has guitar and bass playing a medieval riff that’s heavy and undulating, the overall effect like an emo cover of Dio. Initially more traditional, ‘Monsters’ races along, slinky, sexy and heavy before raging out like a heavy metal version of Siouxsie & Banshees’ ‘Spellbound’. Whereas ‘Someone Like You’ pleasingly recalls All About Eve feel before the acoustics give ways to full on electrics as Atkins solos lyrically, extending song’s melody before investing with full-on anguish.

‘Wrecking Ball’ is – I kid you not – a Miley Cyrus cover,  and in adding a little Nico to that Goth folk All About Eve flavour actually works well. ‘Once’ pours on the gothic a little too much though veering toward a campy shock rock come cleaned up thrash/symphonic veneer. But points are returned with ‘Breaking My Heart’ a haunting guitar playing through the chord changes with melodic bass underneath as Hölzlová contemplates the direction love might take.

Continuing to confuse the listener, ‘Do What You Want’ is an argy-bargee Oasis with a heavy psyched thrudding beat, over which a loud and noisy guitar solo joyfully and the album finishes with the more epic ‘Demons And Angels’ where amid growling voice-overs, piano and thunderstorm sounds a sustained guitar plays over a thrashing mid-paced symphonic power metal number.

At its best Out of The Shadows is alternative Goth rock with folk leanings. A collection of very different songs rather than an album where a band is seeking to define a musical identity, but Into The Unknown certainly have a way about them.