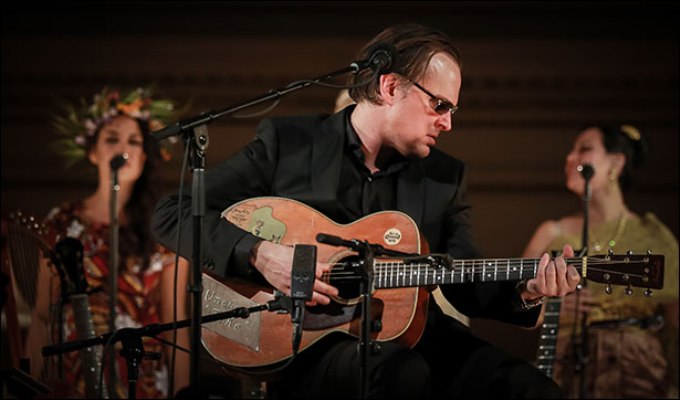 In January 2016 Grammy nominated blues rock guitarist Joe Bonamassa packed his platinum selling albums away and headed off to Carnegie Hall where he intended to put in two nights playing an especially rearranged acoustic set of songs. There with a cast of musicians, roughly half of whom he’d not played alongside before and rehearsals taking place only just prior to the concerts, he had record producer Kevin Shirley and film director Phillipe Klose, record the event.

The results are now available on a variety of formats ranging from double CD, double DVD, Blu-ray and a three album vinyl collection. Now, me I rather like it when Bonamassa lays downs his Les Paul but a whole concert can be a daunting aural undertaking (Some years back he released An Acoustic Evening At The Vienna Opera House that while some others raved about I felt sucked the life out of some great tunes). However, having listened to both the CDs and watched the DVDS for Live At Carnegie Hall – An Acoustic Evening I can recommend them and express the opinion that each offer different experiences and its worthwhile comparing some of those.

The film opens with an aerial view of New York by night, intercut by cameo footage of the musicians, takes in the cold night air of the city’s streets then draws forth from the hall’s rear to move in close on Reese Wynans at the piano. There classical refrains are met by acoustic filigres from Bonamassa and returned back as bluesy refrains from Wynan as they launch into a real country honky version of ‘This Train’ from the guitarist’s last studio album. It’s followed by ‘Drive’ given a haunting melody that has us meander down Ry Cooder backwoods where inventive piano refrains evoke rippling brooks just out of sight. Bonamassa actually takes rather a back seat musically throughout, his guitar strumming rather than grandstanding with some of the stringed picked melodies you initially presume to be him found to be multi-instrumentalist Eric Bazilian or Tina Guo on cello or erhu for this number when you watch the film.

With the gospel blues of ‘The Valley Runs Low’ we also begin to appreciate the backing vocals of Mahalia Barnes, Juanita Tippins, and Gary Pinto  more earnestly, Barnes in particular bringing the kind of quality Yvonne Elliman brought to Eric Clapton’s classic mid-70s solo line-up. It’s followed by a number I thought might be rather dry and bare sounding in this format but comes with a new haunting bayou arrangement; Bonamassa’s voice a distant echo that grows during ‘Dust Bowl’, a capo on his guitar and the percussion section building momentum steadily. The stately piano and vocal harmonies of ‘Driving Towards The Daylight’ are pleasant enough but it’s when the song veers off into what’s practically a tip of the hat to progressive rock of the classic Yes variety that your ears prick up and any wavering attention is drawn to the screen – And once more you appreciate the star performance put in by Wynan whose hands play so closely together rather than opting for grand gesturing runs, working notes and creating chord inversions so compellingly throughout.

For the next two numbers Bonamassa enters acoustic Jimmy Page mode, applying a bottleneck to ‘Black Lung Heartache’ aided and abetted at close quarter by Guo’s cello and Bazilian’s mandolin while former Page/Plant percussionist Hossam Ramzy unleashes a myriad of sounds. With ‘Blue And Evil’ Bonamassa rolls out a series of eastern scales before launching into some prairie blues The Firm or Coverdale/Page might have delivered. Pretty cool stuff. Bazilian then takes up saxophone for ‘Livin’ Easy’ – An instrument he apparently only knows three notes for according to the bonus DVD, but he sure knows how to make them wail over Wynan’s honking piano that blends jazz and blues in equal measure, returning to mandolin for ‘Get Back My Tomorrow’.

After an age and only the perfunctory “thank you” heard at the end of a song, Bonamassa takes time to speak to his audience and introduce the band, then it’s onto a jaunty ‘Mountain Time’ – those high soulful vocals refrains you hear coming from Gary Pinto rather than Barnes and Tippins who each take their solo turn on ‘How Can A Poor Man Stand Such Times And Live?’. The pace pick up with Black Country Communion number ‘Song Of Yesterday’ moving from tender fingered notes from Bonamassa over Wynan’s piano to the point  Anton Fig’s bass drum kicks in hard and the whole piece exerts some quality Bad Company style dynamics.

It’s the filmed version of ‘Woke Up Dreaming’ you’ll want to partake of.  With only Bonamassa and Tina Guo on stage expectations might be that it is one of the show’s quieter, more intimate moments. Well, frankly, when Miss Guo’s on screen you simply can’t take your eyes off her. From the facial grimaces and serious eye contact of some 70s guitar hero in full blown flight to the near orgasmic looks of expression; she not only looks fantastic throwing great shapes and poses she also plays a blinder, from melodic accompaniments to full on startling solos.  The song veers into a ‘Flight of Bumble Bee’ homage as the pair encompass lightning fast solo and duets or complex clarity, Guo’s bow strings torn in finest Page ‘Dazed & Confused’ mode. You can tell it was a show highlight the Bonus DVD features the second night’s version.

Less Page’s version more one Clapton might have covered circa-461 Ocean Boulevard there’s a wonderful gospel harmony feel to the cover of B.B.King’s ‘Hummingbird’ with a particularly fine echo on Bonamassa’s own voice. As the cello plucks incessantly, Bonamassa sinks into his acoustic guitar twisting notes and bending strings, taking the melody for an extended walk during this happy rendition until the harmonies return amidst piano crescendos as it soars towards the higher echelons of Blind Faith/Derek & The Dominoes comparability.

‘The Rose’ closes the set. More soft rock than country blues it is pleasant enough and frankly a relief at the end as we witness Bonamassa put a smile on his face and begin to crack jokes. It’s only on the Bonus DVD interviews you appreciate the strain he must have been under to get this right. And he did.

There’s a lot that shouldn’t work on paper: From nearly two hours of music largely rearranged from the versions most people know having to hold our attention, to not that much going on visually on the DVD (most of the band being seated throughout). However, this is quality laidback listening with yours ears picking up at just the right moments due to some excellent playing, while the filmed close-ups during solos prove excellent viewing. The highlights ‘Woke Up Dreaming’, ‘Mountain Time’ and ‘Song Of Yesterday’.