Review: Hacktivist – Outside The Box 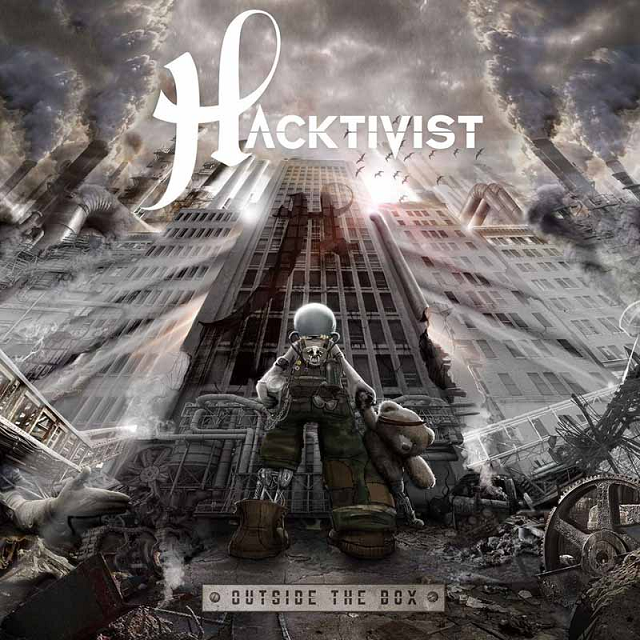 Hacktivist appeared on the music scene back in 2012 and brought their sound to the mix with their self-titled debut EP – it wasn’t necessarily a new sound per se, but it was fresh nonetheless. Since then their presence has sky rocketed. Show after show, tour after tour, the band have been complete workhorses eventually landing themselves a deal with Rise Records which would release Outside The Box.

Hacktivist immediately sends a message to those listening. The opening track, ‘Our Time’, with a short intro and a literal ‘thank you’ to those who refuse to conform to trend, insinuates that Hacktivist are not the norm; a bold statement but one that sets up the entire feel of the album. Outside The Box really gets going with the second track, ‘Hate’, which jumpstarts the down-tuned heaviness but seems like a weak opening track when you consider the caliber of some of the other tracks that could have been more of a suitable opener. As we move towards the next two tracks, both  bring guest vocalists, namely, Jamie Graham (Heart of A Coward)  and Rou Reynolds (Enter Shikari), and both are credible tracks. Jamie doesn’t necessarily bring anything spectacular to ‘Deceive & Defy’ but its a nice homage to some of that band member’s roots, whereas Rou turns ‘Taken’ from a Hacktivist song into an Enter Shikari song with a chorus that definitely wouldn’t be out of place on one of his albums; it’s a good show of support and UK camaraderie from all involved on these tracks.

‘The Storm’ pauses things for a second to give the listener a break with the sound of clean guitars and rainfall eventually introducing some drum and bass beats. The point of the track is unclear and throughout the two minutes just seems like filler but it definitely allows for ‘No Way Back’ to come in with a punch. At this point we are back to Hacktivist, with a chorus that is very reminiscent of a One Minute Silence track.

‘False Idols’ is a track filled with downtuned groove likely to get heads banging for sure, whereas ‘Rotten’ slows things down again and features Astroid Boys turning the Hacktivist album into something else entirely. At this point you can’t help but take notice of what a mixed bag of songs Outside the Box actually is. There is hope though with what is the stand out song, ‘Elevate’, originally included in that 2012 self-titled EP and completely re-recorded for the album. There are noticeable differences in the two versions with the newer seemingly having lost some feel through its cleaner and more polished sound.

Things are slowed down once again with title track ‘Outside The Box’ before moving into ‘Buszy’, a track that has been thrown about for a few weeks and provides the listener with one last glimmer of hope of hearing that ‘Hacktivist heaviness’ we all know and love; fortunately, it does indeed deliver before ending on ‘The Storm II’, a melodic sing-a-long which is a fitting close.

Overall, this isn’t a bad debut album, but as much as it’s painful to say, it’s not great either. It provides too much of a mixed bag of tracks and doesn’t allow for much consistency, which makes it difficult to stay engaged for the duration. The songs that are good are really good, but they leave the rest being mediocre at best. That being said, Hactivist never fail to put on a great live show, so there should definitely be an excitement about hearing those better tracks live because they’re bound to turn the place into a frenzy.