Review: Ricky Warwick – When Patsy Cline was Crazy (And Guy Mitchell Sang the Blues)/Hearts on Trees 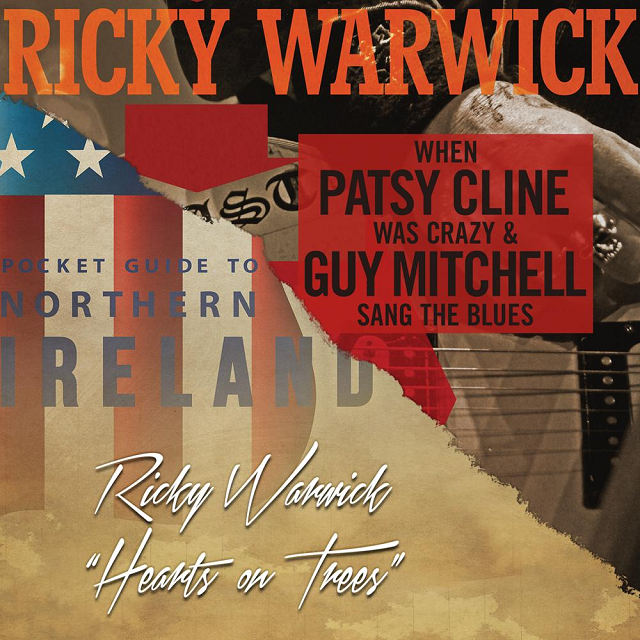 Ricky Warwick should be a man that needs no introduction, especially among those that are fans of classic rock. To those that are not aware of who he is, this is the man that took the lead vocalist spot in the final version of Thin Lizzy (and technically still is with the few special one off shows coming up), the front man of what became Black Star Riders, he has released multiple solo records, and worked with some of the finest names in the classic rock world. He really is among the finest representation of the life and style of classic rock in this day and age, and to prove this latest solo release is huge in size, planting the flag firmly and truly standing as one of the greats.

‘When Patsy Cline was Crazy/Hearts on Trees’ is more than just an album, it’s a double album of huge scale, and even more than that, its an open heart story of both ends of a massive spectrum, stories of strife and pain, to stories of love and harmony.

Opening up brings the expected classic rock we know and love well with Ricky Warwick, bluesy, rocking, and perfect for any mood. ‘The Road to Damascus Street’ brings everything we know from Black Star Riders to the table, which really showcases the input of the man in the band, ‘Celebrating Sinking’ plays on upbeat and as great listening, while lyrically it sings a tale of what was going on back in the day of great ages of music and drinking to it. The Irish soul in the voice really comes through and sounds like that of an old friend.

By the time you reach ‘That’s where the Story Ends’, you get the country influence come through strong, a real compliment to the great sound of Ricky’s voice. The good time tracks come back into play with ‘Johnny Ringo’s Last Ride’, a real great listen, but even that doesn’t have the rock vibe as much as ‘Son of the Wind’, nothing holds a flame to that twin guitar sound Thin Lizzy and Wishbone Ash made though, which comes strong in ‘If You’re Not Going to Leave Me’.

As a stand alone album, ‘When Patsy Cline Was Crazy (And Guy Mitchell Sand the Blues)’ is damn fine and great listening, but that is only half the story with the second album ‘Hearts on Trees’ coming up. Much more stripped back as an unplugged, acoustic album. This plays even stronger for me. Any artist that can take a step back from an amped up record and put their soul into an acoustic album is a true musician, Ricky Warwick proves he has that talent in spades, sometimes there are just things you’re born to do that can’t be taught.

There are tracks that don’t hit out as strong, but they are made up for by the ones that do. ‘Presbyterian Homesick Blues’ is an outstanding opening track, swiftly followed with ‘Tank McCullough Saturdays’ in just as good quality. ‘Psycho’ is as stripped back as it can be, letting Ricky do the work with his voice. Going from that to the happier ‘Hearts on Trees’ a song about tales of hope and love for the future.

‘Said Samson to Goliath’ is the song to dwell over with a whiskey, and stands out the most as the track to enjoy on this half of the double album. The rest plays on in a similar style, but none quite grip like this. Closer ’82’ is a great track to finish off on though.

As a whole, this double album is no easy thing to pull off, but despite the differences, as a whole if sounds good, a true showcase of the writing abilities of the man, especially with 20 songs. How Ricky Warwick seems to just be able to come out with song after song is something to behold, and this is a prime example that it doesn’t always have to follow the typical rock style we know from the Black Star Rider/Thin Lizzy frontman. Although the first album is where all the excitement is, the second is perfect for easy listening, maybe a night around a barbecue with friends, or sat contemplating life, it is one that can be put on anyway and pleasantly enjoyed, and will no doubt be easy to pick up and listen to throughout future years.