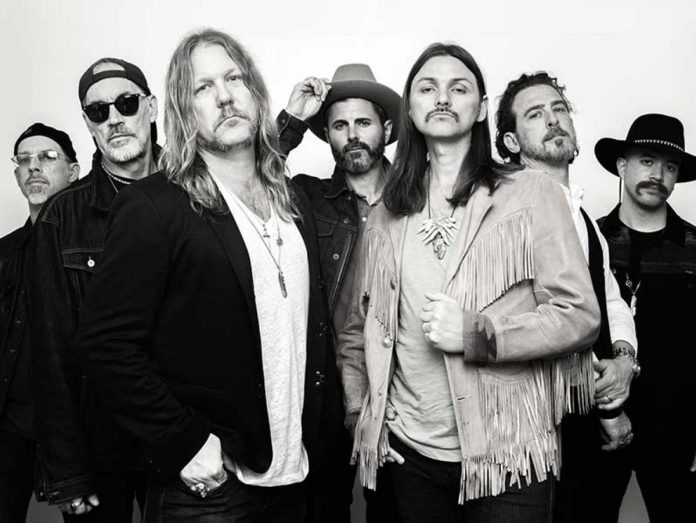 There remains no great masterplan at work here. At present, Devon Allman, Duane Betts (Guitars & vocals) and Berry Duane Oakley (Bass & vocals) have kept the money-spinners with their gilded promises at bay and not taken up the mantle of the Allman Brothers’ Sons as some unwieldly side  title, whereby they can swoop in and grab all-and-sundry’s theatre auditoriums gross sales across the USA.

Do they sound like what has gone before?… Of course they do; how could they not? But they’re not filling in for something missing, they’re hear to find their own vibe, while sharing in a kindred background and soupcon of mutual influences and mixing it up with some of their own individual sourced ingredients.

This here’s a second helping from the band, and whereas with their debut it felt more a case of the main men guesting on each other’s songs, this time around you know they’ve settled in, got a feel for what they’re doing and have begun to develop a shared identity, not just the main folk involved but the whole seven man army.

It’s an eclectic mix of songs but for the most part they gel coherently across the length of Bless your Heart, nothing’s rushed, indeed there are a fair few gentle tunes that are among the best, and in each and almost every one of them there’s time enough to o solo to one’s heart’s content.

Gentle but proud chords chime out far and wide while Devon Allman’s draws us in, with opening number ‘Pale Horse Rider’. There’s little instrumentation going on more a heartbeat of sound felt until the absolutely awesome euphoric vocal “whoa-whoas” come in and at least three lead guitars entwine, solo, embellish, and inspire both one another and the song as a whole. It’s more a mood throughout than a song per se, but what a feeling.

‘Carolina Song’ drifts in after, a melody guitar line coaxing and caressing the lyrics on this laidback country rock tune. Then, with ‘King Crawler’, the guitars perk up, for some rock ‘n roll with a little Southside Cajun, and maybe even a little New Orleans shuffle when some horns come along to play. Betts take lead vocals, and possibly the slide guitar parts, here with Devon adding backing vocals on the chorus.

‘Ashes Of My Lovers’ follows suit in the same manner vocally, whereas musically it’s somewhat curious – As if Graham Parker & The Rumour were busking on a rock shuffle version of that old classic ‘Ghost Riders in the Sky’. It’s appealing, and the feeling grows the more you play it.

‘Savannah’s Dream’ has them either tuning up or applying freaky effects before giving way to an organ playing south American dance patterns, the rhythm section itself moving things along nicely as assorted guitars and a piano take this instrumental out for an epically lengthy atmospheric stylish spin.

‘Airboats & Cocaine’ is Southern rock with a slide guitar that’s got a hard-on. This smacks of the 80s while avoiding that period’s airbrushed production quality. The title says it all, and a song Clapton might’ve wrote a few years back, while the following ‘Southern Rain’ is the kind of slow peculating blues before harmony chorus vocals send it somewhere really sweet – A nicely emotional foray as guitars ring out with celebratory soloing.

Camfires round an open fire with acoustics in hand as Betts declares “these are the stories we tell” in ‘Rivers Run’. Heritage is a big thing with these guys. ‘Magnolia Road’ is another shimmering rock number with a live feel as solos are passed one to another, guitar to piano and vocals too are shared on this road song.

Opening like a car careering from a crash over a 12 bar blues is ‘Should We Ever Part’. It settles over a shifting drum pattern with jazzy guitar lines while Allman sings on the beat before wailing out with some R n’ b now and again. The guitars noodle in distorted freeform, there are big washes of slide. It’s a little left of field time wise so not going to be an immediate like for most.

Nice surprises keep turning up though and ‘The Doctor’s Daughter’ is a big one. Piano, a little organ, then a slide are all well and good, that the guitar then begins to work out like Dave Gilmour on Dark Side of the Moon over an early Eagles style refrain works because there’s a new kid in town vocally –  Berry Duane Oakley’s voice is warm and heartfelt, the midpoint between Allman’s deep soul and Bett’s higher country twang. The song extends into an acoustic guitar exploration, running over eight min long.

Heading for the home stretch, ‘Much Obliged’ proves a more formal country number with Allman taking lead vocals. While concluding ballad ‘Congratulations’ sees him take more long noted, emotive vocals, that again takes a well-mannered term of respect, but hides the hurt inside felt – whether from those perceived to have done better by escaping a small town and its mindset or a former lover gone off with someone else remains ambiguous.

Recorded in a week on 2” tape, there’s little that’s rough and ready about Bless your Heart. A more cohesive, emotional group album than its predecessor. There are some strong tunes on here, but you also get the feeling that this is still a gestating period, and if the mood takes them, at their own pace, they might just take us some special place a ways down the road.

The Allman Betts Band‘s Bless Your Heart album can be ordered here and on Amazon UK here.