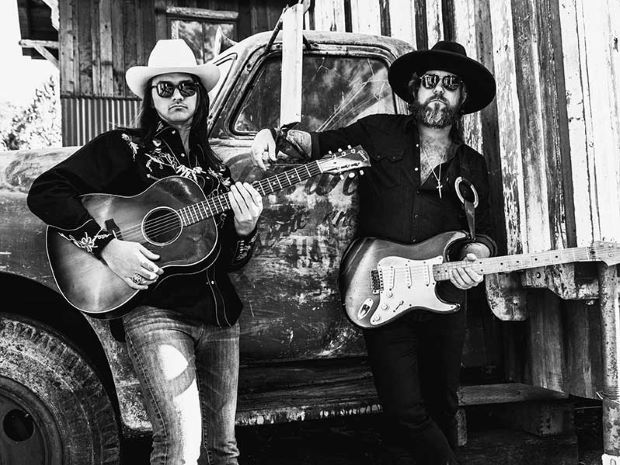 The sons of the south drink deep from their roots but sail gently on beyond them in what constitutes a full-length studio recording of Devon Allman, Duane Betts, and Berry Oakley, aided and abetted in their deeds by those worked alongside their parents.

Distinguishing what each of the two main members, bring to the table is easy in terms of vocalisations, Allman delivers bear-like soul, Betts more likely to croon. The former’s songs are more southern blues to the latter’s country asides, and yet it’s the latter’s guitar we presume to be dive-bombing, making all manner of intricate progressive rock meets death metal scaling riffs in the most unlikely of places amid these tunes. That’s aside from the healthy application of slide guitar on the album that’s surely from guest player Johnny Stachela.

Where they merge is what often leaves us in a quandary. Much as you might like the songs it’s not always easy to distinguish where their combined forces are at work on a number of the songs.

Practically recorded live, opening cut ‘All Night’ is counted in and is a mid-paced boogified rock number that has echoes of early Whitesnake or Quo and more naturally The Allman Brothers. It’s warm, welcoming, and not necessarily original but feels wholesomely good before slowing down as the guitars move exponentially into freefall before returning to the main song. Still in the ballpark by tipping its hat to his father’s hit ‘Jessica’ in its riff in, Betts delineates a dark tale in the search that finds him loving in ‘Shinin’’ with more slides and musical variations pulling in time.

From thereon, they begin to wade deeper. ‘Try’ is a Muscle Shoals style rhythm ‘n blues with gentle polyrhythms that in part evokes Doby Gray’s ‘Drift Away’ hit of yesteryear thanks to Allman’s resonating voice.  Title track ‘Down To The River’ flows in right after as a warm organ stirs in a slow dance groove alongside some great choppy guitar chords, and some cool “woo-woo” backing harmonies, rattling under an evocative lead vocal.

‘Autumn Breeze’ is a coming of age story, one that’s slow in coming but a true rising of the spirit. This and others that follow where they intimate without being explicit that they know who they area, where they’ve come from, and the talent they have is in their bloods and they may respect that but it doesn’t define them.

This runs through on songs like ‘Good Ol’ Days’ where the long slow guitar introduction reaches out searching, before others join it in harmony. It’s gentle, life affirming, tempered, and with a fire with expressive technical rock playing as it expands further musically, way beyond the pentatonic scale. ‘Melodies Are Memories’ is maybe more old school fun country woodcutting , interspersed with waves of classic hard rocking 70s guitar rock. Whereas ‘Southern Accents’ is a gentle piano ballad that evokes Randy Newman both vocally with a slight worn croaking in the throat from Allman and also it enters lyrical sardonicism as it goes from the generalised to the personal.

It’s truly only on ‘Long Gone’ where you can hear them collaborate for sure vocally, sharing verses then singing in harmony on the choruses, – As with most of these songs, they’re on the gentle southern hospitality side. “No long blaming who we are” sings Betts assuring you this isn’t generalised but personal, family. It is also about heritage and the legacy you yourself leave. It’s slow, near mournful but with optimism and again somewhere in it a feel of The Beatles, and all they ever preached was love, so that’s a good way to end. The past is laid to rest, it’s time to celebrate the future.