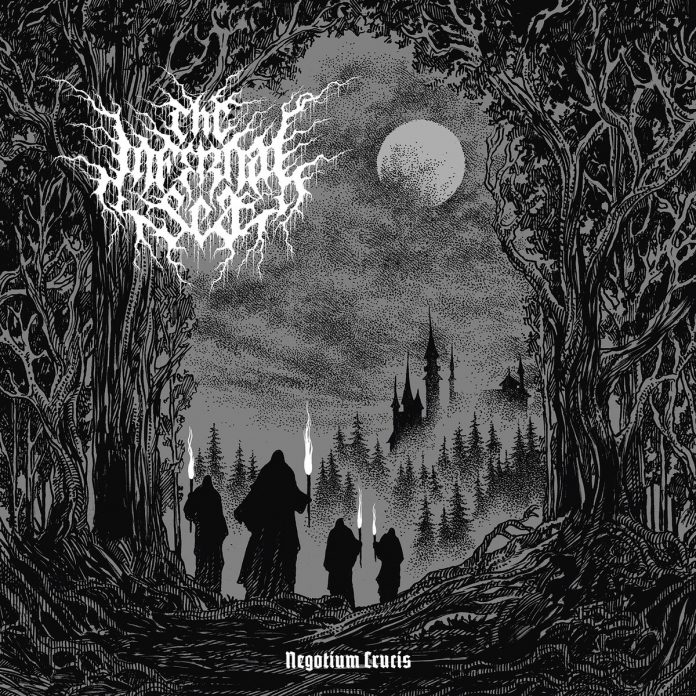 Having seen The Infernal Sea from its very beginnings, I’ve had the pleasure of witnessing their growth and development through the dark and macabre world we live in, for years now they have developed their plague masks that visually, we have all come to know them as, and with that comes the twisted, dark music in tow. For years it seems they have been practicing for a year like 2020, and in all fairness, you cannot fault the timing of their third full length ‘Negotium Crucis’. The perfect soundtrack to the year.

Pushing their boundaries, the release takes them further into a blackened death and roll sound, but it does this without the loss of the biting harshness that fills their earlier releases. The battling anarchy and controlled chaos weave seamlessly with elements of groove to it, a further example of their abilities to not be constrained in creativity.

Openers ‘Into the Unknown’ and ‘Rex Mundi’ take the brave forefront, both clocking in over 7 minutes a piece, absolute showcases of everything the band is about. The more familiar territory of their more traditional black metal drills home in ‘Destruction of Shum’, the band channeling strong vibes of the Norwegian variety here flavoured with groove, a fantastic blend bringing the black and roll sound into play. This is only amplified more in the cutting ‘Befallen Order’, treating us with a rare guitar solo of a more straight-up metal style leading us out to the end, a fantastic show piece of how they’ve built themselves up to take in more than just the regular confines linked to the blackened metal of old.

Changing shifts again, ‘Devoid of Fear’ attacks in militant style, all instruments combine for what I am instantly reminded of as something Bolt Thrower-esque in execution driven by that sharp snare attack. ‘Negotium Crusis’ should be familiar territory for fans already as the lead single with a stunningly dark music video (if you lived in the area of filming, you’d understand just how far opposite each end of the spectrum was!) Given the length of tracks, album closer ‘Unholy Crusade’ doesn’t come at you with all guns blazing in some epically long monster, instead, it digs deep and with precision. Four and a half minutes of evil.

Now sitting in at a decade old, the Infernal Sea have tirelessly worked up from a small stage filled with just friends to play to, to stages all overfilled with absolutely hundreds, if not thousands, sitting strong on the festival circuit, you’d be hard-pressed to find yourself at a place like damnation and bloodstock and not see someone adorning their shirts. Such is their work ethic and cohesion, their music has grown and developed to match their live intensity, this outing is a big black flag firmly planted and withstanding any storm the world can muster against it. Roots firmly planted in the Noise Cabin owned by drummer James Burke (Worth checking out for bands looking to record!), they’ve all the tools and abilities they need to continue spreading their plague. While I only know too well the itch they have to get back on the stage, the wait will be worthwhile with their set standards.

Negotium Crucis is available through Apocalyptic Witchcraft and out now, with varying options for purchase, this really is the soundtrack for the year.