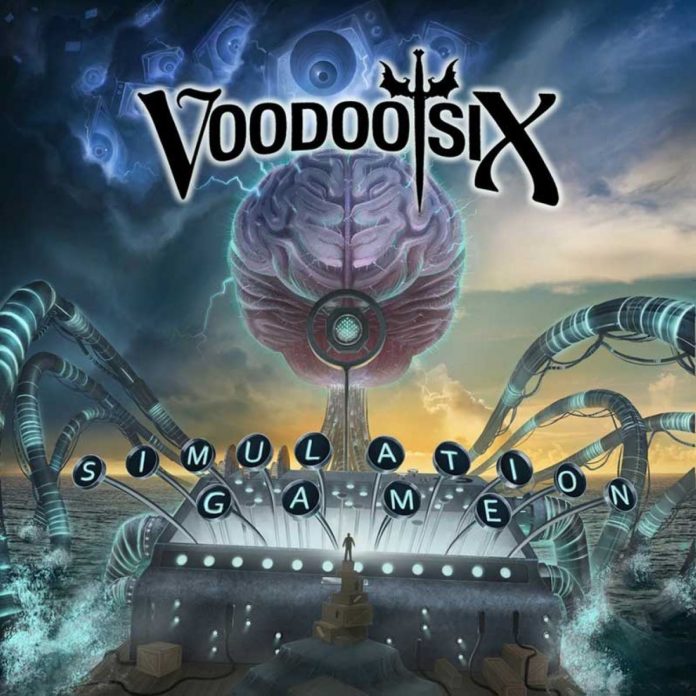 Those in the know are expecting great things of Voodoo Six with this latest full-length album, Simulation Game. For those of us who’ve only heard a track or two here and there previously our expectations may be a little lower.

However, having caught guitarist Matt Pearce & The Mutiny live last year, back when we were allowed to venture out and being suitably impressed, I was more than willing to give them a chance. Well, the music’s different but Pearce’s guitar sound is definable as his own and really helps place the choice slabs of modern metal near the top shelf counter.

Tom Gentry (GUN, Marco Mendoza) has also joined on six-string assault but it’s unclear to me if he actually plays on this ten-track record but there are certainly some harmony guitars whizzing away. Produced by founder member and bass player Tony Newton, who’s got pedigree outside this band, the line-up is officially completed by Joe Lazarus on drums and vocalist Nik Taylor-Stoakes. Now there are also keyboards or studio effects at work, and the video for  the single ‘Liar And A Thief’ also features a violin player.

Right, let me get my only real gripe with this record over, the tendency to veer into slower rumbling sections between their modernistic rock approach can get a bit predictable when you’re focussing on each individual track one by one for the purpose of a review. Played as intended, wherein the overall effects wash over you that’s far less a consideration with several songs being highly impressive.

With a trickle of thrash for ambiance while proving  little symphonic round the edges, opening number ‘The Traveller’ soon blasts into a riff that knows its way round the bike sheds of the NWOHM scene then polished up well. That it’s also not too far removed from Uriah Heep’s ‘Red Light’ ain’t nothing to weep about either, though it basks in a more epic feel of weary boned regret.

They veer off into an Eastern vibe, but as someone who leaves his best mates arguing if ‘Kashmir’ is better than ‘Comfortably Numb’ I’m pleased to say that bit doesn’t outstay its welcome, and the squealing harmony guitars did offset any indifference, and Taylor-Stoakes’ voice becoming a near death growl on its return proves they’re ever ready to experiment.

‘Gone Forever ‘ proves more mid-paced with softer harmonies before its metallic riff shapes into a heavy-duty earworm for a downbeat singalong. ‘Liar And A Thief’ is out as their latest single and is an undulating throbbing muscle of  rhythm with guitar riffs biting at your feet over a tale of life’s misdeeds and few regrets. There’s also a joyfully spasmodic wall climbing guitar solo that needs to be heard.

Between broken chords and slamming attack, onto slow military march before sifting into lighter acoustic flow, and a near-enough mediaeval melody weaving its way among the barragingsections, ‘Inherit My Shadow’ as appears to delve into Jungian psychology lyrically, but then many of the songs use such concepts.

‘Last To Know’ is a symphonic ballad with guitars that chop and scrape to their own devilish pleasure and a mid-section solo that not only scales the length and breadth of the fretboard but seems to bore right through then come back again! ‘Lost ‘ is tumultuously riffed passing into another slower vocal section then more adventurous guitar soloing. Similar in that there’s a neo-classical/prog symphonic approach to ‘Never Beyond Repair’ this lullaby of hope found within despair sees a fine main and backing vocal delivery.

If U2 played heavy metal, there’s a moment or two in ‘Brake‘ where you think it could be them, while ‘Control‘ may feature a more classic rock chord workout its approached with a modern crushing attack. Meanwhile, there’s a slow strangled metal blues solo playing over orchestration on ‘One Of Us’ before harmony guitars pick up the scent collectively only for one of them to race off raging and wailing to its heart content, and is a fine place to end the album.

Simulation Game by title and cover imagery gives the impression of being some slick sci-fi themed game, if so it’s the game of life in a spiritual sense.

Emotionally bruised, battered but far from down on its last legs, mystical and magisterial in approach with some classy time signatures these are songs for the lost but not quite damned.