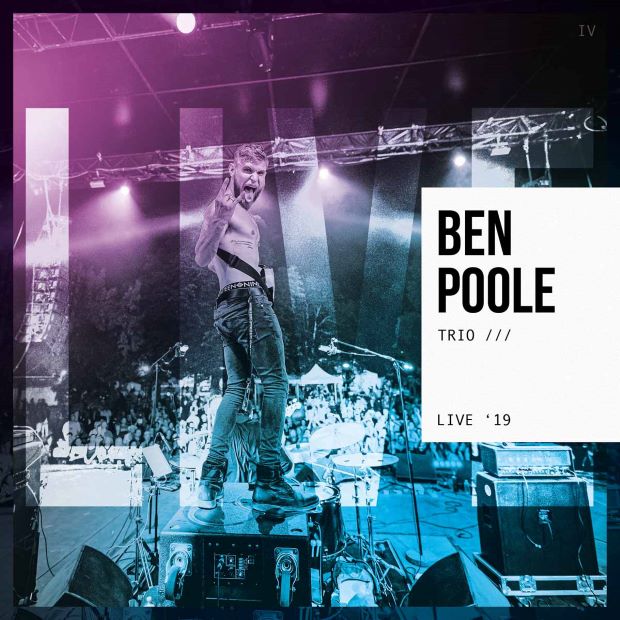 London and the third Cumbria way. Having witnessed the young man in Manchester earlier that year (as special guest to Ana Popovic), I’m happy to testify to his prowess in a live environment, and if you can’t get to see him for yourself then this live twin pack CD is just what the doctor ordered.

Alongside Poole are former King King drummer Wayne Proctor and bass player Steve Amadeo who produce a really nice raw earthy sound over which some fiery guitar plays out. A much more potent force than on Poole’s  studio albums, that have felt a little too polite for my tastes in the main.

While no slouch on guitar, Poole’s stage patter is rather minimal. A nonchalant “Good evening” is all we get before he begins to warm up on guitar with fire power building as first track ‘Take It No More’ is offered. Heavy on the backbeat with distorted guitar grunting gruffly, the six string reluctantly bopping in the chorus as Poole sings higher, the music swaggering and swaying. A fuzz bass plays under the beginning of guitar solo that turns out to be long and slow before returning back into repeated chorus before fading out.

‘Win You Over’ is casual and bluesy but with another shrugged bop to it, one that evokes early pop rock ‘n rollers with a minor harmony section thrown in. When he takes his guitar off for a solo display you almost want to accompany him with a Shadows walk – Some tightly pinched notes being played, slowing things down to introduce the rhythm section, with his voice a soft sighing croon as the beat get harder.

Trucking along as wide-eyed pop rock into a chorus rock and rolling large in all the right places, with a sexy overdriven groove that’s deceptively simple but oh so effective is Start The Car’.. Throughout the drums pattern laid out by Proctor is so effective, and the fine tempered tone to Poole’s guitar solo when the drums hit out harder while Amadeo delivers steady walking bass pattern is just cool.

‘Have You Ever Loved A Woman’ is a classic blues number. The John Mayall Bluesbreakers’ version wherein Eric Clapton first established his potency and claim as guitar god a prime example by which all other renditions are compared over 50 years later. From bluesy licks into a livelier section, evoking Clapton in parts, but his penchant for pinched notes gives it a somewhat well-mannered precise feel; it’s a different nuance, rather than letting notes ring out once struck, but making it feel emotional nonetheless.

This is just the intro I’m referring to here, by the way, for I find this version preferable to other white boy renditions, including the aforementioned classic version. Maybe this is where the modern male unafraid to show their emotions displays honesty, cuts through the machismo showing desperation, but still exemplifying feelings unforgiven. Slowly it takes its own sweet time and is not overworked as you listen to the controlled sustained notes paced through various tempos.

‘The Question Why’ is next with a West Coast feel, like Steely Dan playing the blues. Getting deeper into it, his anguished voice rings out and a solo slips in just when you know it would but it’s the way it expresses the song’s title, questioning, searching out before raging in such a way that every note is distinct, that you admire it is clearly being played with purpose. Shifting gears with furious squeals as we enter a driving blue rock tempo, is ‘Further On Down The Line’, although as with many of the numbers here it slows down and drops back in the sound level before returning for the home run.

‘Don’t Cry For Me’ concludes the first disc. Gentle chords strum over a sympathetic soul ballad rhythm section. An engaging and emotional break-up number, Poole’s voice breathes in deep, sighs, groans, croon and effects anguish and pain. There’s an effective harmony vocal used by him and Amadeo, before an instrumental section wherein a guitar solo changes course into a Hendrix dive -ombing blues rocker – It’s late night smooch music apart from the fireworks in the middle!

Disc 2 opens with ‘Lying To Me’ that has a Bad Company style to it with the rhythm section holding a rock steady beat. It follows through with ‘I Think I Love You Too Much‘ that’s funky blues rock in a Buddy Guy manner before moving into soul groove rock.

’Found Out The Hard Way’ follows naturally, broken chords building towards another soul groove albeit slower and another break-up number too. Turning things round, Proctor opens things with a great big band sound before guitar and bass come in to deliver a sexy come-on shuffle with ‘Stay At Mine’, surf guitar winging its way though the speakers, as Amadeo delivers a bass line built for go-go dancing to make come back. It’s cheeky and fresh and a very welcome groove.

Poole then proceeds to end with two epic length numbers, coming in around the 15-minute mark each. First up is ‘Time Might Never Come’ wherein this version lies somewhere between an upbeat Crosby, Stills, Nash & Young number and a subdued Red Hot Chilli Peppers funky strut… And a magnificent bass solo you just have to hear to appreciate. Dude, it’s all about the timing.

Apt parting call is ‘Anytime You Need Me’. This aching slow blues with pretty sounds becoming part hymn part lullaby, goes for the epic here; breaking free from Poole’s main default of verse/chorus repeat, take solo, repeat song but not quite making the break, which he should. Regardless, there is sensitive soloing moving towards a raging storm building off in the distance, where every note finds purpose. Tempered feedback returns us to the main song, audience clapping along before more vibratory feedback with some choice heavy rock chops, echoes phrased melodies and yet more feedback before another brief shout out of: “Thank you very much, everybody. Thanks for coming along. My name’s Ben.”

These are songs the Ben Poole Trio are playing, not just a collection of riffs and hook choruses – Okay the repeat of solo into final verse/chorus can become something of a cliché but overall this record is all about what to play and what not to. I like his choice of notes, and the controlled deceptive simplicity of this rhythm section is a lesson in itself. Bottle this for the next studio album I say.