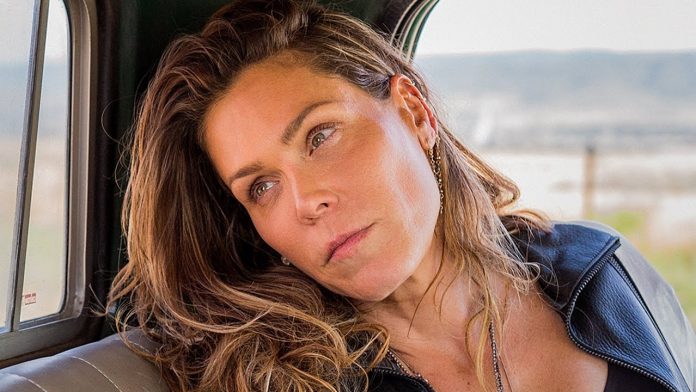 Just how highly rated Beth Hart is can be seen from the comment made by blues guitar man Joe Bonamassa after they’d recorded together “Man, she’s got it all, she’s the new Janis Joplin, she’s the real deal”. Beth Hart is as real as it gets. She’s not one for the airbrushed sickly sweetness of certain well known female vocalists we could all name who’re currently in vogue. She ‘throws her cards down, shares her darkest secrets with you and invites you along for the ride.’ Her previous album, War In My Mind, is a testament to this.

The backstory of this album of covers starts following an impromptu ‘Whole Lotta Love’ rendition in a studio a few years back, she was invited to do a whole album of Zep covers, but declined, stating ‘To sing Zep properly, I’d need to be pretty pissed off’ and she’d put all her rage behind her. But the pandemic put her in touch with her rage again and, feeling ‘pissed off’ at her life being put on hold, decided… now was the time to do the Zep covers album.

Her choice of Zep material comes from a range of their albums, and all the arrangements stay faithful to the record. She starts with a powerful version of a perennial Zep stage favourite, ‘Whole Lotta Love’, and if Robert Plant was female, this is how he’d sound. She’s also courageous in her choices as it takes real chutzpah to cover classic Zep tracks like ‘Kashmir’, but she does as good a version as you’ll ever hear, capturing the power and intensity of the song. Similarly with ‘No Quarter’ and ‘Stairway To Heaven’, where her impassioned vocals carry both off in style.

However, a couple of her choices could be questioned. Rather than ‘The Crunge’ and ‘Dancing Days’, this reviewer would love to have heard Beth tackle tracks like ‘Rock ‘n Roll’ and, in particular, ‘Since I’ve Been Loving You’ as, with her vocal range and powerful delivery, she could nail both. ‘Dancing Days’ immediately segues into ‘When The Levee Breaks’, Zep’s audacious reimagining of a blues originally written by Kansas Joe McCoy and Memphis Minnie, and is as different from their version as it’s possible to get. Beth follows Zep’s version. Songs like ‘Black Dog’ and ‘Good Times, Bad Times’ are just made for Beth Hart and, on ‘Black Dog’, she nails what’s probably her best vocals on the album.

‘Babe I’m Gonna Leave You’ is another of Zep’s reimagining’s, this time from folkie Anne Bredon, and the album closes with a sensitively handled version of ‘Rain Song’, one of Zep’s more delicate tunes.

Even if there’s a touch of low key orchestration of tracks which don’t need it, which may distress Zep purists, overall Beth Hart puts her soul into this album, and when she sings “Good times, bad times, you know I’ve had my share,”  you know she’s singing from the heart.  The songs she’s chosen to cover shows the breadth of the musical spectrum Zep operated in and, while there might not be enough guitar work for Zep fanatics, few can deny Beth Hart’s caught the spirit of every song she sings on what is a very credible covers album.