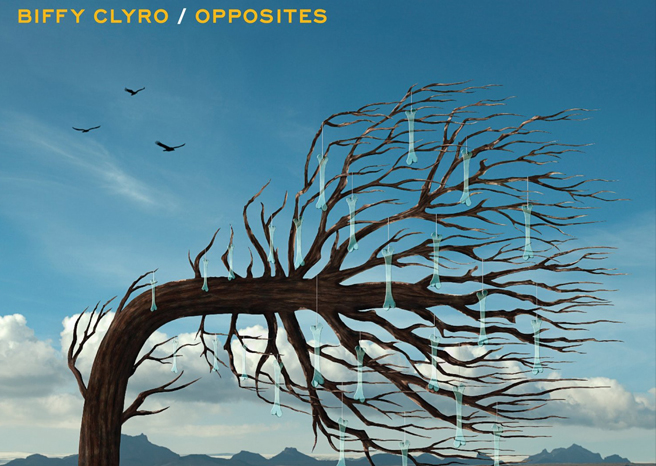 To some Biffy Clyro have only made two albums before this one, 2007’s ‘Puzzles’ and 2009’s ‘Only Revolutions’ both of these albums have made the Scottish trio bonafide rock superstars. However there are three albums before Mercury Awards and such started hurling superlatives; ‘Blackened Sky,’ ‘The Vertigo Of Bliss’ and ‘Infinity Land’ showed a band evolving from shouty art rock to something I hadn’t heard since Tool wowed me with Lateralus. A band that made you think, rock and wowed you with their inventiveness. ‘Puzzles’ hinted they were surely about to make that happen and then Only Revolutions was released and whisper it… it was fine. Not groundbreaking, not genre defining, just okay.
Now ‘Opposites’ originally started life as two separate albums that would lyrically examine someone thinking they were sinking into a hole and then the second looking at that circumstance more positively. So maybe not the most ambitious concept album but hey! Then it changed and what we got instead was a double album and what I’m reviewing here is the standard version featuring sixteen songs, a sort of overview.
We start with ‘Different People’ a song that reveals a little bit more each time you listen to it and makes full use of Biffys growing powers of harmony and synth before throwing itself into a up tempo beat.
‘Black Chandelier’ is the second single to be released and typifies the Biffy sound since 2007, it makes full use of Simon Neil’s engimatic lyrics and the bands epic arrangements before breaking down in some chopping riffs.
One of the success on ‘Only Revolutions’ was ‘Bubbles’ in my opinion and its good to hear a more old style jagged riff with some great high top action from Ben Johnston, indeed ‘Sounds Like A Balloon’ could be a follow up to ‘Bubbles’ with its pointed verses and anthemic chorus. Biffy then slow down to a full ballad with the title track, we have a full orchestra to remind us that this is a sad song if the opening lyric ‘you are the loneliest person that Ive ever known’ wasn’t hint enough.It is pretty but I don’t think this is something that will you’d end up repeating or jumping to.
‘The Jokes On Us’ has more of an uptempo beat and Neil is in full shouty mode, James Johnstons bass is more present then in any song prior at this point but this feels less fleshed out and very much a filler.
Biffy used to be known for experiments in their previous albums and ‘Spanish Radio’ I guess is 2013’s version of that. We have a bit of mariachi to start before giving away to a great rolling beat from Johnston. Its a great melody with a decent hook and the Spanish element actually lifts it to stand out.
At one time Biffy were tarred with the Emo brush like their peers One Hundred Reason or At The Drive In and titles like ‘Victory Over The Sun’ seems like a hark back to that. It starts slowly creeping to a great viscous riff and desperate harmony but then this is where Biffy sound unique as they turn the beat quicker a cracker!
‘Biblical’ sounds like a rushing wave coming into the shore, its a fantastic mix of poignant lyrics, smashing guitar and a good use of synth. Possibly the strongest song on the album and should be the next single.
The first thing I heard of this album was ‘Stingin Belle’ which is one of the heavy songs on the album it rolls on a spikey riff before coming into a upbeat catchy chorus. It is songs like this that have made Biffy accessible yes but also where they have lost some of the more hardcore following.
They then strip back the overload of instruments for the second ballad, ‘Skylight’ which is pointed at with Neil claiming that this is ‘the saddest song.’ An acoustic guitar with a piano starts this one as Neils voice echos through his haunted lyrics. Rather than going into a rushing guitar we have synth and a computerised beat, its a curious song.
‘Trumpet Or Tap’ sees the lads try and get to the anthemic chorus in a different manner as the beat alters from high to slow but this is another filler. By ‘Modern Magic Formula’ your hoping that Biffy might alter their own formula and thankfully this is another heavy number with a more raw sound. Its strange that by this stage in the album your yearning for a more straight forward attack and ‘Modern…’ is that release.
Both of the ballads on the album have left me rather bored and cold, Biffy attempt it one more time with ‘The Thaw’ which is rather apt for this time of the year. The slide guitar is something that I have never heard on a Biffy album and it actually works rather well, yes we are going to have another epic build but rather than going for the anthemic chorus we have strings complimenting Neils voice, easily the better ballad on ‘Opposites.’
We close with the ‘Picture A Knife Fight’ a lively upbeat song despite its title, Johnstons drums are at the forefront of the song and keep it bouncing along, its a decent end to the album in all. ‘Opposites’ will no doubt continue Biffys run of highly praised albums and numerous awards but they are as a whole album it is very formulaic, true they have used every instrument they could but its the same jaunty riff followed by quick time drumming before slamming into a chorus, it does get repetitive. They are better musicians then that and although this isn’t a bad album at all there are some great tracks here it does seem 2007 was a long time ago for the Scottish trio and we wait for a more consistently inspired album.