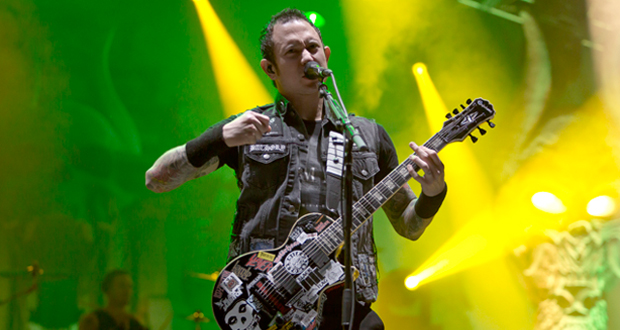 RAMzine readers will be familiar with other major rock festivals this year, but it is universally recognised that Bloodstock is tailor-made for metal-heads.  Since going ‘open air’ in 2005 this site has seen all kinds of acts from Slayer to Alice Cooper and everything in between. This year’s line-up was no different – four nights of carnage at Catton Hall headlined by Trivium, Within Temptation and Rob Zombie.

Here is the first part of out Bloodstock highlights package, with more interviews coming on RAMzine.co.uk and full coverage coming in issue 5 of RAMzine.

Some don’t realise there are actual bands on the night before the festival kicks off. The Sophie Lancaster stage hosts five bands tonight including cult favourites Reign Of Fury, Metaprism and speed-metallers Desecration – who really draw in the crowds.

The first real highlight of tonight’s entertainment is pirate-metal crew Red Rum.  There are plenty of people in pirate costumes, so it’s only fitting we get in a pirate-y mood! The band that started as a college project pay tribute to horror icon and metal fan – Christopher Lee – by covering ‘The Hobbits have gone to Isengard’ which really brings the night alive – a mount Doom mosh pit!

It’s hard to believe ‘The Greatest Band Of All Time’ aren’t just headlining tonight (the day BEFORE the festival kicks off), but this is their Bloodstock debut. It all started when fans took to the BOA forums and demanded ArnoCorps should play. The smell of cigar smoke fills the air as the action-adventure hardcore rock ‘n’ roll band take the stage. As you know the band fuse punk and metal to bring back true stories of heroes pilfered by Hollywood over the years. Heroic stories like ‘Predator’ and ‘Terminator‘ drive the audience insane. As front-man Holzfeur says, these tracks are ‘Old But Not Obsolete’. In the excitement he crowd surfs while still belting out the ballsy lyrics.  Bassist Barrakuda literally surfs the crowd, using his guitar case as a board! All while welding a fan-made plastic machine gun during ‘Commando’.

The six-piece hold an inter-gender body-building contest during ‘Pumping Iron’ and everyone wins! To this band, every ‘Godamn hero and shero’ is a winner. The prize being fan-favourite ‘I’m Ballsy’. The lyrics say it all: I’m Ballsy/I’m a stud/ I don’t take no shit from anyone. There seems to be a theme to all these songs, I just can’t think what. 90% of the crowd walk out in black camo-paint on their faces. The bar has been well and truly raised tonight.

Thrash veterans Nuclear Assault give the festival site a much needed wakeup call with the appropriately named ‘Rise From The Ashes’ and ‘F# (Wake Up!)’ soon followed by Brit-metallers Raging Speedhorn, make a welcome return. Their guitarist takes a bit of a tumble a la Charlie Chaplin but picks himself up give the audience what they really want – riffage.

Armoured Saint still have it! Although their performance is relatively brief, they perform track from their latest album ’Win Hands Down’ plus plenty of crowd favourites. Enslaved bring some extreme black metal gloom to what is otherwise a bright, sunny day. Although black metal isn’t for everyone, it’s hard to deny that Ivar Bjornson and co are great at what they do. This is what Bloodstock is all about.

Filling the Sophie Lancaster Stage with heavy-as-hell riffs is Hang The Bastard. Performing tracks of their upcoming album ‘Sex In The Seventh Circle’ this seems like the perfect environment for the West Londoners. Back to the Dio stage are veterans Overkill, screeching through their back-catalogue. Very OTT, but also very  metal. Hop over to the Hobgoblin New Blood  stage are the controversially named Piss Viper – dirty , gritty, Southern metal riffs. Well, Southern Wales maybe…or near enough. Great to see new bands getting so much attention at this festival.

Friday’s special guests are Bloodstock favourites Sabaton. The Swedish power-metal machine are kitted out in trademark steel-plated vests and camo pants, and of course – aviator shades. They know how to work a crowd and pull out hard hitters like ‘Ghost Division’ and finishing with ‘Metal Crue’, followed by a huge explosion of yellow confetti, which covers the whole main stage area. There’s nothing wrong with true showmanship in heavy metal.

From Orlando to Catton Hall are the weekend’s first main-stage headliners: Trivium. You can feel the ‘big show atmosphere’ at the Dio stage. Rather apt the stage is named after Ronnie James Dio as a lot of Trivium’s newer material is inspired by Rainbow and Dio-era Sabbath. Matt Heafy and co start with their first festival performance of ‘Silence In The Snow’ and ease us in to their now-classics such as ‘In Waves’, ‘Dying In Your Arms’ and the track that made them the head-liners they are today -‘Pull Harder on The Strings Of Your Martyr’. When Trivium were announced as this year’s first head-line band –  a lot of Bloodstock fans said they weren’t ‘heavy’ enough for the festival. Fair point they might not be the heaviest act on this year’s bill, but they are definitely one of the most metal. This is a group who don’t just care about metal, but care about the fans and share our love of the genre. In a way, the passion of the four-piece reflect the passion of the festival-goers who travel from all over the continent to come to this Bloodstock each. A great metal band for great metal fans. This is a great start to the festival. Let’s hope we can say the same about Saturday and Sunday.

Check RAMzine.co.uk for further highlights of  Bloodstock 2015: Saturday and Sunday.

The full, extensive review of Bloodstock 2015 will be featured in issue 5 of RAMzine.

You can read the interview with Trivium guitarist Corey Beaulieu by clicking here.