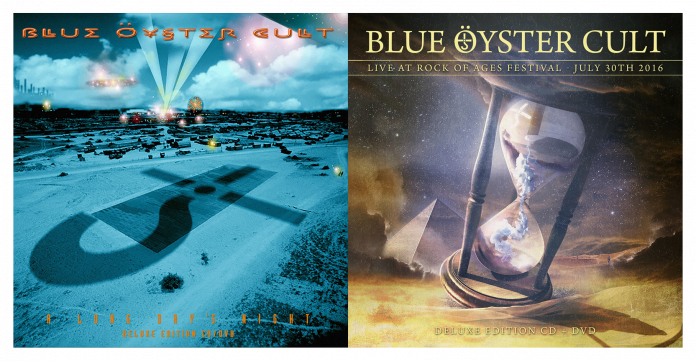 2020, despite the worldwide pandemic which has wrought havoc with the music industry, doesn’t appear to have slowed down the mighty Blue Oyster Cult (BOC), forty five years plus long in the tooth and counting. They’ve released their first new studio album in nineteen years, The Symbol Remains, to very favourable reviews proving to a new generation of fans they still know how it’s done and they’re not just a nostalgia act. They’ve also released a ‘live’ album from their 2017 gig at London’s 02 Indigo, and now they’ve plundered their archives once more and released two ‘live’ albums featuring the BOC doing what they do best – which is rocking up a storm on stages all over the world.

When classic rock bands get talked about in the UK and the US, the name BOC invariably gets a mention and, while they might no longer make hit albums, and many of their songs [which are classic rock radio staples] were written in the 70’s. As these two releases show, BOC still have an audience which clearly enjoys what they do.

At the time of Long Day’s Night being recorded in Chicago in June 2002, on the day of the Summer Solstice, BOC were only a couple of years from celebrating thirty years together. This album has now been completely restored and remastered to offer a stunning new listening experience. They open with a storming version of ‘Stairway To The Stars’ from their debut album, with Buck Dharma’s guitar well to the fore – the pace doesn’t slacken. ‘Perfect Water,’ ‘Dance On Stilts’ and ‘Lips In The Hills’ shows BOC performing some of their lesser known tracks to good effect, with ‘Buck’s Boogie’ a showcase for some guitar flash, and ‘Harvest Moon,’ but for the mid-track rockout, has the touch of Neil Young and Crazy Horse. BOC are a band with several time-proven classics in their repertoire, and we’re given several of them, with a lengthy version of ‘Astronomy’ and the powerful coupling of ‘Godzilla’ (surely one of the great underrated riffs), with short bass and drum solos, and the magnificent ‘(Don’t fear) the Reaper’ to conclude the set.

There’re thirteen tracks on the CD, though the DVD / Blu Ray edition offers nineteen, featuring classics like ‘Then Came The Last Days Of May’ and ‘Cities In Flame With Rock ‘N Roll,’ which means the fan buying the CD misses out.

The 2016 show was recorded at Germany’s “Rock of Ages” festival where they gave a memorable performance. By which time original member Alan Lanier [who sadly died in 2012], and Bobby Rondinelli had been replaced by Richie Castelano and Jules Radino, then Danny Miranda was replaced by Utopia’s Kasim Sultan. This release contains eleven tracks, including seven from the 2002 release, but this set is by far the stronger of the two, because it includes several epic songs not featured on Long Day’s Night. ‘This Ain’t The Summer Of Love’ with its powerful riff opens the set, which is followed by ‘The Golden Age Of Leather’ and ‘ME262,’ the latter a real ‘in your face’ rocker. There’s a lengthy version of ‘Then Came The Last Days Of May,’ with some great guitar interplay, and they inevitably bring proceedings to a halt with storming versions of ‘Godzilla’ (no solos this time) and ‘(Don’t Fear) The Reaper’, both of which are far superior to the 2002 versions. The set is also available on DVD and Blu Ray, but minus ‘This Ain’t The Summer Of Love,’ for reasons unknown.

The only downside is the voices of original members Buck Dharma’s and Eric Bloom are no longer as strong as on previous ‘live’ releases, but the music easily compensates for this. The BOC may be old, but these two releases suggest they’re not old and tired.