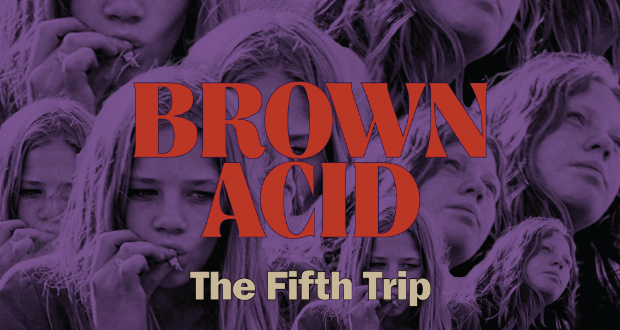 Another release from the always reliable Brown Acid series, ten more slices of the weird, the wonderful and the occasionally quirky. If the digital revolution has done only one good thing, it’s helped make accessible many previously unheard of bands who’re now finally getting to see their music made available to a wider audience, rather than simply be the preserve of the hardcore fans. Lenny Kaye did this for garage bands with his ground-breaking Nuggets series, and now Lance Baressi is doing the same with the Brown Acid series. Many of the artists featured in the series probably wouldn’t ever have seen the light of day without Brown Acid, and it’s hard to imagine some of these tracks having been hidden for as long as they have been.

The album opens with ‘No Reason’ from Ohio’s Capt Foam, AKA Matt Pike, and what a way to begin. This is a superb 70’s sounding track bristling with gorgeous distorted guitar work reminiscent of Beck-era Yardbirds. This track sets the bar high for everything else to follow, and one track which matches the standard set is ‘Nothing in The Sun’ by Finch, a quite glorious blast of garage-psych. This was the ‘A’ side of a single, and the ‘B’ side, ‘Let It Be’, is utterly brilliant and a sadly ignored classic of garage-psych. Expect to pay in excess of £100 if you’re ever lucky enough to come across this single.

Several other tracks stand out. Mammoth’s eponymously named track is a three-minute burst of some monster guitar hooks, and Lance gives us some hot guitar work with ‘Fireball’. The quirky also gets a look-in with Flasher’s ‘Icky Bicky’ ( ‘B’ side is Tricky Icky!), a quite delightfully quirky tune. How could it not be with a female chorus singing Icky Bicky? This could almost be Zappa from one of his later period albums. Zebra’s version of ‘Helter Skelter’ though is the one I’d prefer to think Charles Manson had in mind that fateful night in 1969 when he met Sharon Tate.

If I have only one gripe about what is otherwise a pretty damn good collection of tunes, it’s that fans may rightly feel they’re being short-changed, as the entire album contains only 10 tracks and plays for only 37 minutes. Surely there was room for a few more artists to be given a break?